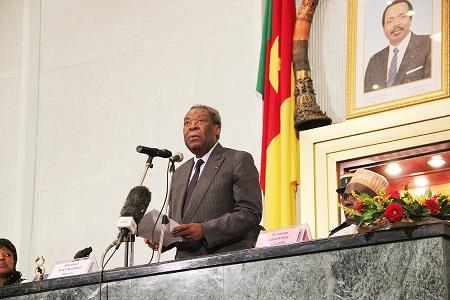 86 out of 100 senators voted in favour of Marcel Niat Njifenji during a 5 hour plenary session yesterday June 13, 2013 in the hemicycle of the National Assembly.

One item made up the agenda of the much awaited session: the election of the bureau of the Senate. Overseen by the elders member of the house, Nfon Victor Mukete (assisted by the two youngest senators), the plenary began with the verification of the quorum. He then called on his peers to unveil their candidatures for the post of president of the Senate. In his new capacity as president of the parliamentary group of the Cameroon People’s Democratic Movement at the Senate, Senator Peter Mafany Musonge took to the rostrum and said: “I have the singular honour to propose Mr Marcel Niat Njifenji as president of the Senate”. This reaped tons of applause from senators and the public. Ballot papers were distributed to senators by ushers transparently counted by senator Charles Mbella Moki and Senator Paulette Bisseck, under the watchful eyes of the Prime Minister and members of Government, members of the National Assembly, members of the diplomatic corps accredited to Yaounde as well as journalists, in accordance with provisions of section 9(2) of the recently adopted Standing Orders of the Senate. “From our tally of the vote count, Senator Marcel Niat Njifenji is declared president of the Senate”, announced Nfon Mukete. Based on section 9(3), the 1st ever elected president of Cameroon’s Senate replaced the dean of the house on the stage and delivered his victory speech. “I am overwhelmed with joy, honoured and surprised”, he said. He moved on to thank his peers for bestowing their votes on him. He later on thanked the national president of his party, Mr Paul Biya for selecting him for this prestigious but challenging position. “I also wish to salute members of the provisionary bureau, particularly their president, Senator V.E Mukete for the smooth conduct of senatorial affairs ever since we started meeting on May 14, 2013”, said President Niat.He then proceeded with the election of the first senior Vice President of the house. “Who are those interested in this post?”, he questioned. Senator Mafany Musonge came back to the rostrum and said, “May I first of all express my brilliant congratulations to the newly elected president of the Senate”. That said, “I’d like to propose HRM Adoubakari Abdoulaye to the post of first senior vice president of the Senate”. The latter’s election unfolded with 87 votes in his favour against 13 empty ballot papers, openly counted by senator Benjamin Amama and senator Din Bell Armande. With this, the president of the house ordered a 15 minute break. Lasting for close to an hour, the break permitted the senators to have bite, a sip and quickly compare notes with media practitioners on the twists and turns as well as expectations and counter expectations of the plenary session. “Today’s election of the bureau of the Senate represents a good take off for our country’s democratization process. The elected president is an old time friend while the first senior president is a son. I am indeed elated”, said Senator Dakolé Daissala of the Movement for the Defense of the Republic. Part II of the session continued with the election of the other members of bureau. The president of the house called on the CPDM parliamentary group leader in the Senate to read out the list of Senators interested in the available posts. “Thank you Sir”, said senator Musonge before informing his peers of a consensual list arrived at by the five political parties represented in Cameroon’s upper house of parliament. Reason why the said, “for the four vice presidents we have senators Genevieve Tjouest, Paul Tatchuan, Sylvestre Naah Ondoa and Simon Achidi Achu”. Concerning the three questers, he proposed senators “Jean Baspitse Baskouda, Njifua Fontem and Paulette Bisseck”. At the level of the eight secretaries, senator Mafany Musonge proposed “senators Baba Ahmadou, Fon Techie Nde II, Samuel Obam Assam, Awa Magdalene, Marie Claire Mopia Mbio, Pierret Hayatou, Dakolé Daissala and Pierre Flambeau Ngayap”. 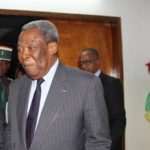