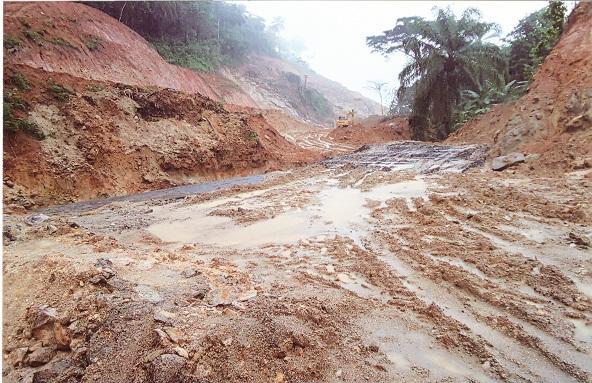 Though still under construction, the Trans African highway that links the North West regional capital of Bamenda to the Nigeria/Cameroon boundary locality of Ekok is impacting the economy unprecedentedly.

The road project that is at least 200 km long has been split into three lots. The first phase consists of 67 Km and runs from Bamenda to Numba. While the second phase spans from Numba to Bachuo Akagbe in Mamfe, the third phase links Mamfe to the border town of Ekok. As works intensify on the ground, the impact the road would have on the economy upon completion is already being felt by locals. According to a public transport vehicle driver whose only name we got as Mr. Mbah, “when I leave Bamenda now I am at least sure to reach Mamfe before nightfall unlike in the past when we spent weeks on the road.”

Transport fair from Bamenda to Mamfe has been halved following the works, locals confirmed. “Last year at this time we used to pay CFA 8000 to Mamfe, but now we are paying just CFA 4000. And we strongly believe that upon completion it would reduce again by half,” said Divine Foncham, a Batibo based businessman.
Transport vehicles popularly referred to as “clandos” are in a fierce battle with well established travel agencies on who is who there-on. Ten seater buses as well as berlin cars now ply the road. The traffic there-on has increased tremendously. So too the exportation of “Eru” is thriving. During this reporter’s less than two hour sojourn in Widikum, at least nine Carina II vehicles full of the delicacy which sells in Nigeria like hot burger drove pass. In the meantime, Momo sons and daughters are battling for land in Kendem whose climate Foncham said “is favorable for the growing of cocoa, palms and other tropical crops whose demand would sky rocket upon completion of the road.” The North west regional representation of the Cameroon chamber of commerce, mines, industries and crafts, CCIMA have already undertaken negotiations with local traditional authorities to provide them land for the creation of periodic markets to meet the economic demand that would result from the completion of the mult-billion Bamenda – Ekok trans African highway.One of its members, Peter Ngufor says “we met with the Fon of Mankon recently in this respect. We require from 20 to 30 hectares of land on which we would erect a periodic market with lodging facilities and more to ease business between our local traders and foreigners that would be flogging in upon completion of our road.”Execution rate
Being executed by three different Chinese companies, the works are being supervised by a Canadian works firm dubbed SNC Lavalin. Of the three lots, the second is the most advanced. Its execution rate, Lavalin’s Fotso Kamga estimates at 80 percent. “Almost all the stretch has been tarred except for some patches that require special attention,” said Kamga who is a civil engineer. It is worth recalling that the contract for this phase was awarded in July 2008 for an execution period of 36 months. The deadline expired last July and the Chinese engineers, Kamga said “applied for a six month extension of their deadline to the works minister.” For their part, the first and third phases are only about 18 percent gone, SNC Lavalin’s supervisory mission chief, Guy Sipehou said. The rains have retarded the work but Sipehou still hopes the February 2013 deadline would be respected. For the Bamenda – Numba lot, the hills are being broken down to give way for the road which in the past winded through the latter. With the heavy rains most of the Chinese engineers have gone home on vacation. But Sipehou said though they have already consumed half of their execution deadline, the clearing and leveling which is the most difficult have been carried out at more than 60 percent. And when the rains subside next October, they would have rounded off with that and commenced paving and the building of gutters ahead of tarring. Co-financed by the African development bank and the government of Cameroon just like the other lots, this one is estimated at CFA 35 billion tax free. While the Bamenda – Batibo stretch according to the terms of the contract would be rehabilitated and given another layer of tar, Batibo – Numba is complete construction. Upon completion, the total distance would have been brought down from 67 km to 63Km given that the hills are being broken down to avoid the winding. The road would be seven meters wide while on hills it would be 10 meters wide so that slow vehicles like trucks have their own lane, Sipehou confirmed.