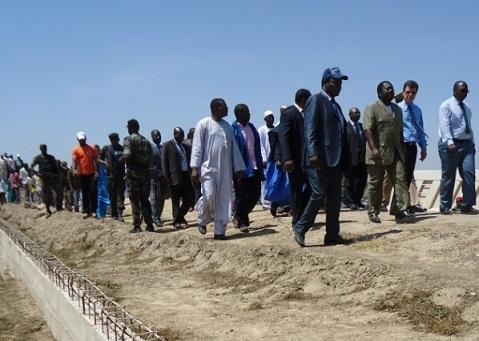 Within the framework of bettering traffic on the corridor, rehabilitation work is due to take off here next June.

A loan agreement to that respect was reached in the Far North regional seat of Maroua last Thursday October 27 between the State of Cameroon and the European. To minister Motaze, “the loan agreement is the beginning of the concretization phase of the greater accomplishment program Paul Biya announced in Maroua in the build up to the October 9, presidential election.” The two accords that constituted the agreement stand at xaf 71 billion. While one is aimed at the refurbishing of the stretch exclusively in the Far North region , the other is consecrated to maintenance works on the banks of at least 15 rivers in the region among many others. The state of Cameroon was represented at the signing ceremony by the economy, planning and regional development minister, Louis Paul Motaze while Gregor Binkert, resident director of operations at the European union represented the latter. The signing ceremony was the culmination of a two day tour by both parties to the region to have a feel of the day to day problems locals are faced with. Accompanied by the Housing and Urban development minister, Clobert Tchatat, state secretary for Public works, Hans Nyetam Nyetam and the director of land transport at the Transport ministry, minister Motaze and Gregor Binkert made stops in the Logone and Chari as well as in Mayo Danay divisions. From their observation, the region the rest of the country is lacking in pipe borne water, electricity and road infrastructure. More to that, the banks of scores of its rivers are sinking and constituting a veritable life threat to those living there-around. As per the loan agreement, the corridor would be rehabilitated exclusively in the Far North region. This would see the complete rehabilitation of the Magada – Maroua and the partial makeover of the Maroua – Dabanga stretches. A new bridge has also been earmarked over the Tildé river. According to Louis Paul Motaze, the partnership envisages to technically and financially support projects such as that to fight the degradation of Logone, Maga and the Mayo Kaliao river banks among others. Fondly referred to as the corridor of hope, the Douala – Ndjamena stretch which is at least 1500 Km long would be completely tarred by 2013, it has been confirmed. Upon completion, the road would greatly facilitate trade between the Coastal and the three Northern regions. It would also foster sub regional integration. Given that trade with Nigeria, Central Africa republic, Congo and Chad would witness a jump.  Foreiggn earnings would greatly step up. Trade would also flourish. The completion of the road would be followed by the construction of toll gates and weigh stations all along. Considering the trade that usually grows around such structures, locals would see revenue sources increased. While the 24km stretch from Dimako to Bonis is due completion later this year, Garoua Boulai – Nandeke, Nandeke – Mbere and Mbere – Ngaoundere would be completed in 2012.