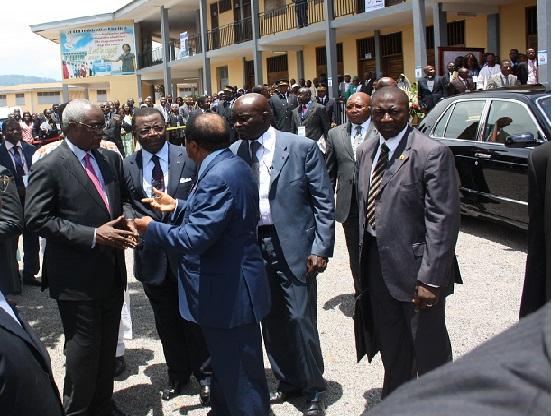 The six men and one lady voted in the nation’s capital, visited few polling stations and pressed palms as they await the results.

Voting started across the city of Yaoundé as early as 8:00am yesterday October 9.

Olivier Bile of the Union for fraternity and prosperity accompanied by his wife voted at the Essomba neighborhood by 10:00am. He said “my feelings are serene, I have come to perform my civic duty. I am happy because I saw several Cameroonians here for the same purpose”. Marcus Lontouo on his part, leader of of the Cameroon national congress voted in Madagascar. The process continued in tranquility as Hubert Kamga of “l’Union des populations africaine” went to the polling station located at the Charles Atangana high school to cast his vote, not too far from where incumbent Paul Biya voted. Esther Dang of the “Bloc pour la reconstruction et l’Independence économique du Cameroun” was at Ecole du Parc repiquet. Coming to the Ecole publique du Colibri, Atangana Nsoé of Grand Cameroun came in the company of his wife and child where he voted with his daughter standing close to him. He told the media that “this is the first time I am voting like a true citizen, you can guess the choice I made. Bad citizens do not vote”. The most awaited moment of voting in Yaoundé was at 12:00 noon when Paul Biya and wife stormed the Government primary school of Bastos. The presidential couple got into the hall and submitted their identification papers for verification. After that, Paul Biya went ahead to collect the twenty three ballot papers and then cast his vote in the transparent ballot box in front of the crowd. Then followed Mr Biya’s wife and son, Chantal and Franck Biya for the same ritual. After that, the outgoing President of the Republic pressed the palms and walked out of the hall where a battery of reporters from national and international media quizzed him on his overall appraisal of the election. “I want to congratulate Cameroonians for the responsibility they showcased during the campaign period. Also permit me to thank all Cameroonians who asked me to go in for another mandate. That is why I am here. Today is a dicisive day. I will know whether they will continue with me or with another person. I want to wish Cameroonians good luck”, he explained. He continued to air his views as he said “I am waiting for the report from Elections Cameroon, Elecam. I must say it is a young institution, it has done a good job. But, perfection is not of our world. I call on all to be indulgent vis a vis the eventual imperfections of Elecam. There was no desire to fraud the election. We are for transparency and free elections”. He remained very humble and modest as he noted that “it is a presidential election, I am talking like a citizen and I must wait to see who will be elected”. After giving perspective to the press, Mr and Mrs Biya had a 30 minute drive across the town of Yaoundé during which militants and sympathizers of the Cameroon people’s democratic movement came out en mass to salute their choice, the people’s choice, Paul Biya.It should be noted that most government officials and Cpdm bigwigs present in Yaouné voted at the Government primary school of Bast, as is usually the case. In this respect, the Prime minister and Head of Government, the Secretary general at the Presidency of the Republic, the Director of the civil cabinet, a cross section of ministers, some religious leaders and the Government delegate to the Yaoundé city council all cast their votes there. Meantime, it must be noted that across the 4,400 polling stations operational in Yaoundé, there was an overall sense of calm and quiet throughout the capital city during the voting process. Even though officials of Elections Cameroon are yet to make strong statements on voter turnout, in house sources at Yaoundé based divisional offices say the overall turn out lingers in the neighborhood of 70 per cent. No incident was recorded as Yaoundé city dwellers were seen moving up and down without stress. Security officials say the policemen and soldiers that were seen at strategic spots in the town were there for preventive measures. From past experiences, the capital city has always made it a tradition to support Mr Biya and his party. From one election to another, be it presidential, municipal or legislative, Yaoundé has stood by Paul Biya. 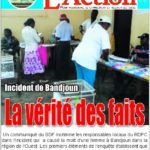