The president elect yesterday thanked militants of his party and all stakeholders of the just ended electoral process in a six minute win speech.

Four days after the official proclamation of results of the October 9
poll by the Supreme Court which sits in lieu of the Constitutional
Council, Paul Biya addressed all Cameroonians yesterday October 25
within the framework of his thank you message. His talking point was
gratitude vis a vis militants of the Cameroon people’s democratic
movement, those of the presidential majority, members of Elections
Cameroon, judges of the Supreme Court, media practitioners, the 22
candidates that vied for office, forces of law and order as well as
officials of the ministry of Territorial administration and
decentralization. By thanking journalists and other media professionals,
he demonstrated his appreciation over the fact that so far, few or no
news report has out rightly promoted violence and hostility as post
electoral practices. Similarly, he is happy with the responsibility
showed by most of his 22 opponents. In this connection, it is worthy to
note that some have officially conceded defeat and thus congratulated
the winner, Paul Biya in the pages of the national bilingual newspaper,
Cameroon Tribune. “I am happy to notice that our democracy is
ongoing”, he further said. This statement alone ends pointless and
purposeless debates on the truthfulness of the poll. To this effect, the
president elect is firm and emphatic on the meaning and spirit of
democracy: government of the people, for the people and by the people.
In this case, the people chose Paul Biya for the next seven years. “I
am aware of the load of the confidence you once more bestowed on me”,
he further noted. It is this confidence that the president elect needs
in order to translate the policy of greater ambitions which marked the
mandate that wraps up into the policy of greater realizations contained
in the mandate that opens up in the next couple of days. Peeping deep
into this key whole, one sees millions of jobs, several kilometers of
tarred and feeder roads, transparency and best practices in governance
as Mr Biya’s topmost issues from now till 2018.The six minute speech
permitted Paul Biya to call on all Cameroonians to come on board in the
struggle to make Cameroon an emerging country by the year 2035.
“Cameroonians of all regions, religions, generations, tribes, social
class, etc will transform Cameroon into a true construction site”, he
insisted. His thank you message equally insinuated that gender equality
and youth inclusion will move the country towards an equitable
distribution of Cameroon’s natural resources. From this perspective, it
can be suggested, without fear of contradiction that, the coming mandate
will be free from exclusion. It can further be argued and
understandably so, that, within the next seven years, more youths will
be co-opted around the President of the Republic and the projects he
will initiate, a lot more women will be given strategic assignments,
growth stimulating projects will see the light of day while tribal
considerations will be relegated to the background. “Wherever you are, I
call on you all to get mobilized and assist in building this country”,
he rounded off. This last presidential prescription is a clarion call to
all citizens of Cameroon to be ready to participate in changing
Cameroon for the better. Paul Biya therefore solicits the input of Mr
and Mrs everybody in the economic emergence and modernization of
Cameroon. He wants Cameroonians, in and out of country to study,
understand and resolve Cameroonian problems. 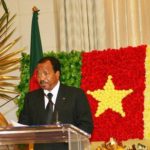 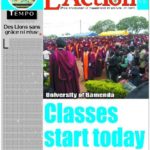