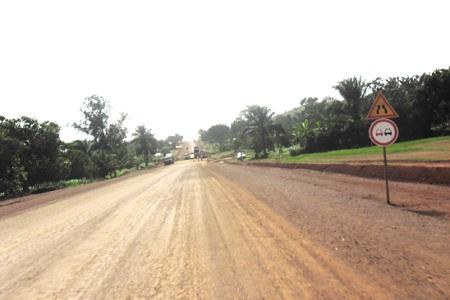 The first section of the road that runs from Ndop-Kumbo (60.5 km) is on course with the widening of the road, opening of gutters and building of new bridges.

This has cut the journey from Bamenda to Kumbo by an hour. “I could take about 3 hours because of the pot holes, ditches and stones on the road, but now I take about 2 hours,” confessed Adamu Konyuy, a “clando” driver.  Although the transport that had moved to Cfa 3000 from 2000 is yet to drop, the journey is less tedious. Journeying on this had become a nightmare. “I was in Bamenda last year from June to August. You need a good 4WD vehicle that would carry you round the bumpy road from Bamenda through Wum, Banso, Ndop and Bambui. It is a very interesting trip but a bit long,” Emmanuel Njela Nfor said. Technical experts say the tarred road would be 10 metres wide, 7 metres being the carriage way and the 2 pavements taking 3 metres.Launched last December, the work is more than 70 percent completed. The ring road project is divided into four sections: Ndop-Kumbo (60.5 Km), Kumbo-Nkambe (66 Km), Nkambe-Wum (110 Km), Wum-Bamenda (81 Km). For a start, government had collected CFA 20 billion-8 billion from the 2011 public investment budget (Bip) and the other 12 billion from loans. Work on this patch would last 24 months.Sogea Satom road Construction Company is executing the project while Ecta Btp Sarl is ensuring the quality control. Construction began a year after President Biya promised the population of the North West region in his speech of December 8, 2010 on the occasion of the golden jubilee of the Cameroon armed forces in Bamenda. “With regard to the ring road which I know the importance for the local economy, know that negotiations are continuing with big companies for the total rehabilitation of this road,” Mr Biya said. The contracts were awarded barely some few days after this announcement.  Although Biya said negotiations were on for the “rehabilitation of the Ring Road” the eventual construction is planned. The circular road covers a distance of 367 Km.  Although patches of the road have been tarred since Biya’s 1991 visit, the ring road had remained a badly maintained dirt road.Winding across valleys and over hilltops, the people of that vast mountainous region regard the road as the key to unlocking the economic potential of the region, where the people are among the most dynamic in the country. The road leads to the country’s largest tea farm and factory in the chilly Ndu sub-division and a vast oil palm production basin in the warm Mboh plain.Also the country’s largest cattle producers after the Adamawa, a dairy and beef processing industry has failed to develope because of transportation difficulties. And tourist potentials like the Menchum fall and the magestic rocks in Ndop have been left unexploited. The ring road Region will link up the divisional head quarters of Mezam, Ngoketunjia, Bui, Donga Matung, Menchum and back to Bamenda in Mezam.These ongoing works is a kept promise from the Head of State and a response to the “cry” of the population in that region. During the home coming of Prime minister Philemon Yang in November 2009, locals had expressed their feelings about the road. Speaker after speaker at an event to thank Biya for Yang’s appointment and to mark the president’s 27 years in power reminded the prime minister of the unfulfilled promise.The timing could not have been better. Yang’s visit came after weeks of prolonged rain left sections of the road completely cut off, with hundreds of travellers left stranded for days. When Biya was in town, the road would be a long blanket of dust. During the visit of the prime minister, traditional authorities of the North West invited Biya to the region “to see the conditions under which we are living.” President Biya saw their “sufferings,” and stretched a hand.
Jude Viban 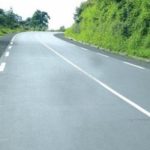 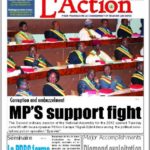