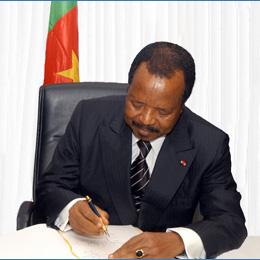 On September 13, 2013 the Head of State, signed a decree introducing the monthly allowance of traditional rulers in the country, joy ensued among the rulers, who promised to support the President openly.

Unlike before, traditional rulers in Cameroon will now receive monthly allowances for their services as the auxiliary arm of the government. It had been their cry across the country for over two decades, and the Head of State has granted their request. “When we met with him after his visit to Bamenda in 2010 for the 50th anniversary of the armed forces, he promised to do something about our status, and he has kept his promise,” Fon Teche Njei II, President of the North West Fon’s Union (NOWEFU) said. The September 13 decree amending the July 15, 1977 related to traditional rulers, and that of June 24,1982 and November 12, 2008 said “chiefs will receive a monthly allowance which amounts are set as follows: paramount chiefs-200, 000 francs CFA, second class chiefs-100,000 francs CFA and third class chiefs-50,000 francs CFA.”However, chiefs who receive allowances as parliamentarians, salaries as civil servants or are appointed into any office are exempted from this monthly stipend, according to the decree. “The benefits cannot be combined with parliamentary allowances, salary of an official or government employee,” the decree reads.But, the traditional ruler must choose in case of double functions. “In the case of overlapping of functions, the person must choose before designating authority after the appointment for the maintenance of the salary or wages, or for the benefit allocated to the traditional ruler.”
Note, this monthly allowance, according to the decree is tax free.From September 13, 2013, traditional rulers have been pouring in their thanks to the head of State. “Any servant of the state, when he gets remuneration he is very happy. We are auxiliaries to the administration – in the North West region we have a union and a national understating (National Council of Traditional Rulers) and we have been asking for this consideration, when it comes we have to rejoice,” the paramount ruler of Mankon, Fon Angwafor III told L’Action.It is not the first time the head of State is buttering up traditional rulers since he became President. In the last senatorial election, the first ever in the budding democracy of Cameroon, the Head of State appointed several chiefs into the upper house of parliament.
“The Head of State continues to give attention to the institution – traditional rulers. We are very happy, no matter how small,” Fon Angwafor III said.He is even considered by traditional rulers as one of them. In the North West he is the “Fon of fons”, and in the south region he was named “Nnom ngui” by chiefs during the Ebolowa Agro-pastoral show in 2011, loosely translated as the “chief of chiefs.”Dropping ahead of the two weeks campaign period for the twin (municipal and legislative) elections on September 30, opposition camps are hailing stones on Paul Biya for using his office to solicit votes for the Cpdm where he is National President.But, Fon Angwafor III refutes this thought. “Only the opposition will think so. It is not to make us vote for his party. After all he will not withdraw the offer after elections.
We assist the government in the management of the State, and deserve so we a wage,” he busts the bubble of opponents.But, Fon Teche II sees nothing wrong, if it is a political coup by the Head of State. “Everyone is a political being. We are solidly behind him. We acknowledge what he has been doing for us especially in the North West. We will support him. The Cpdm will do better in the September 30 elections than in previous ones,” he said. 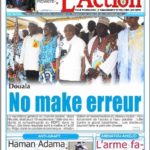