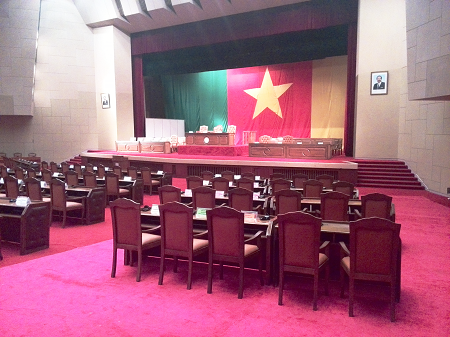 Both houses are set to receive their members: National Assembly at 11 :00 am and the Senate at 4 :pm

A walk through the temporal home of the Senate (Yaoundé conference centre) reveals the readiness of the house. From the main entrance of the conference centre, an isle of red carpet leads to the salle Inaugurale, where the plenary will hold. At the corridors, the vacuum cleaners rumble as the workers of the structure clean the marble of the edifice one more time.A red curtain cuts the hall into two from the edge of the balcony to the floor. And, a huge picture captioned “cabinet du President du Senat” on which is inscribed the National Anthem in French and English seats on a stand and is inclined backwards on the curtains. In the middle a giant Cameroon flag halves the curtain.
On a raised surface at the stage, three chairs pulled forward are assigned to the Senate President, the Secretary General to the left and secretary of the bureau to the right. On the right to these three chairs, seats to host the head of government and other members of government are installed. Meanwhile, the first row of chairs to the left, is reserved for the Speaker of the National Assembly, his first deputy speaker, the Attorney General and the SG of the National Assembly.On the side walls of the stage, the effigy of the Head of State, Paul Biya, on each side watches over the hall. On the floor, single arm leader chairs are arranged in three columns, and on the table, a small board carries the name of a senator to whom the seat has been assigned to. Here, the senators will sit in alphabetical order but within party ranks.
The color of the boards bearing the name of the senators distinguishes one party from the other. CPDM, the majority in the house is colored in white, the SDF in pink and the others in assorted. In alphabetical order, senators Achidi Achu and Aboubakar Abdoulaye for example seat on the front roll of the CPDM group. However, the organizers broke the order to bring Senator Peter Mafany Musonge, the party’s group leader.  Senators from other parties like Flambeau Ngayab of the UNDP, Dakole Daissala will occupy the first row of the third column.
Just below the stage is a long table of four chairs to be occupied today by stenographers of the house, and to ease communication each senator has a translation receiver assigned to each seat. At the secretariat of the senate, senators come in successively to gather more information related to the session or follow other documents. At about 1pm yesterday, Senator Victor Eseminsongo Mukete had just come to meet an administrator. Reports, say at the National Assembly last minute touches were underway to ensure a hitch free plenary.

Context
Unlike the March  session which is an elective one, the June parliamentary session is dedicated to examining bills from government. One of such is the bill on the mining code which never turned up in the last session which is highly awaited. Other than bills, while parliament was on vacation, parliamentary diplomacy scored points. The Speaker of the National Assembly was on a return visit to Cote d’Ivoire.
Also, Roger Nkodo Dang, member of the National Assembly was elected as the speaker of the Pan African National Assembly.On democracy, last session, the control function of the parliament was activated. Senators and parliamentarians were selected to follow-up specific departments of government. This session might ask the question, after appointments what next? Like the first session of 2015, the June session comes at a period which Cameroon is still soaked in the war against the terrorist group Boko Haram although its attacks have dropped considerably.JV 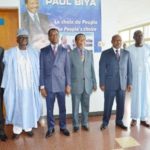 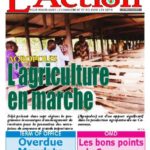