France has more businesses in Cameroon than any other country and is country’s third exchange partner.

In the area of trade, the business between Cameroon and France has grown steadily over the past years, reaching 4.8% in 2013 behind China and Nigeria.The presence of French business in the Cameroonian economy is obvious, with over 200 French companies employing more than 3000 Cameroonians.
Beyond, Hollande’s country helped push Cameroon out of crisis in the early 2000s, by assisting the country to reach the famous Heavily Indebted Poor Countries (HPIC) completion point.Since then, the Debt-reduction and Development Contract (C2D) remains a key bridge between France and Cameroon through which many development projects, including giant ones sprout across the country.Through the C2D alone, France committed itself to put at the disposal of Cameroon seven hundred and ten billion FCFA within a twelve-year period, in the areas of infrastructure, education and health.Under this umbrella between 2006 and 2011, three hundred fifty-two billion and seven hundred million FCFA has been dolled to Cameroon. The money was meant to alleviate poverty.Immediately the first phase ended, France and Cameroon signed in July 01, 2011, a second generation C2D worth 214 billion with infrastructure, basic education, health, as well as agriculture and environment as priority sectors.Another area of economic cooperation between France and Cameroon relates to loans awarded to Cameroon by the French Development Agency (AFD). Some of these loans are combined with the C2D subsidies.In both ways over 20 funding agreements have been signed between 2011 and 2014 to finance big works. Opening up of the Douala Eastern entrance, the construction of the second bridge over the Wouri River, French quota in the construction of the Lom Pangar Hydro Electric Project, the Fluvial drainage of Douala , Drinking water supply in Yaoundé, Bertoua and Ngaoundéré, drainage of Yaoundé town (PADY) are some of these giant projects. To which should be added FCFA 42.6 billion loan agreement signed in Yaoundé last Friday during the French President’s state visit, to redo Bertoua, Bafoussam and Garoua whose roads and embellishment are in bad shape.
An accord of FCFA 29.5 billion to build a new access road to the second bridge over River Wouri in Douala, opening up of the petroleum depot (SCDP) roundabout in Douala and building an underground rail  in the port of Douala was signed. Meanwhile, the third agreement of FCFA 3.3 billion targets agricultural small and medium-sized enterprises. The final agreement of FCFA 655 million is a subvention package on investments by the Diaspora. 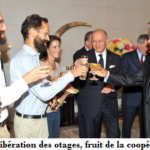