Parents whose children were enrolled in schools in Bamenda fondly called the seat of wisdom during the just ended school year are rethinking their decisions of sending them back come September.

Bamenda the headquarter of the North West region is home to numerous institutes of learning, the reputation of which has drawn parents from all over the country to have their children tap from the knowledge imparted in these schools. From government to confessional, their reputation has preceded them, thanks to the output of both the teaching staff and the schools’ management. The crises in the Anglophone regions led to many schools shutting their doors early on in the school year, sending parents who could afford it to either enroll their children in other schools out of the concerned regions or fly them out to continue studies, and for parents who had no other options to wait and hope for the situation to stabilise.
In the past, schools in the North West region have attracted many by their outstanding performance in general certificate exams and the fine minds they spill out, even making parents of French speaking backgrounds to privilege the Anglo-Saxon style of education. No doubt enrolment in the region’s numerous schools kept rising, making its popularity skyrocket as far as education is concerned and earning it the appellation “the seat of wisdom”. Since November 2016, its credibility has since been dwindling. Schools burnt down, students attacked and molested, acts of vandalism in the two regions have been scaring parents a great deal. Measures put in place by government to salvage the situation and get pupils and students to enjoy the comfort of their classrooms have greatly been undermined by continuous violence against students and schools. Many parents of students in examination classes either gave up on the school year or bore the extra cost of allowing them travel to other regions especially the Centre, Littoral and West to register for general certificate examinations. They have expressed disappointment at paying school fees and not having the full value for it. Even at that, ruffians have had the guts to set schools on fire, violently attacking students going to sit for the exams all in a bid to hinder children from acquiring the much desired education. The situation has gone from sorry to shameful and parents are having a rethink of sending their children back to schools in the affected regions.
Tomorrow’s leaders are definitely not those who do not have a sound mind. Grooming those minds is the reason why education is given a privileged place. If care is not taken, the seat of wisdom might be void of minds to groom.C.C. 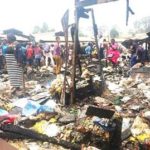