Members of Parliament in the lower house will round off the 9th legislature in this session, other things equal.

In a communiqué read over the state media, the Speaker of the National Assembly Cavaye Yeguié Djibril convened the June session on the 7th at 11 am, at the hemi-cycle of the glasshouse in Yaoundé, three months after the March Session. The MPs will be returning to Yaoundé after a recess during which they carried out parliamentary action on the field and lobbied for their communities. Those from the two English-speaking regions are coming for another session in a context of an escalating Anglophone crisis in the North West and South West regions. Some areas are hot spots of battle between the military and armed separatists. In others, MPs especially of the CPDM are targets of the assailants for kidnap. Will parliament receive any bill from government that will help to quench the tension in the two regions or will MPs make proposals towards are peaceful resolution of the conflict? That is the question. This conflict has pushed many into the bushes and across the borders into Nigeria. Maybe the MPs would initiate a humanitarian relief action to the benefit of Cameroon refugees in Nigeria and Internally Displaced Persons (IDPs).


The current mandate of the parliamentarians began in 2013 after legislative and municipal elections held on September 30. MPs have a five-year mandate, according to Section 148 (1) of Cameroon’s Electoral Code, “Members of Parliament shall be elected for a term of 5 (five) years by universal suffrage and direct and secret ballot.”  “All the seats in the National Assembly shall be renewed every 5 (five) years. Elections shall be held not later than 40 (forty) days to the expiry of the term of office of Members of Parliament,” sub three of the same section adds. As per the Electoral Code, “the term of office of Members of Parliament shall commence on the day of the session held as of right following the election.”  This was on October 29, 2013. 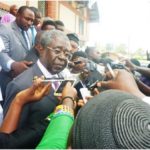 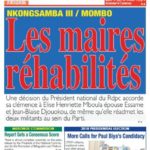