Youths of the South west region have in one voice showcased their fervent support for President Paul Biya’s candidacy in the build up to the presidential election.

It was a true demonstration of force last Saturday August 20 at the Omar Bongo square at foot of Mount Fako. Youths of the nine regions joined their comrades of the South west region in Hegza rally to endorse President Paul Biya’s candidacy for the forthcoming presidential showdown.

The intermittent rain which detractors thought would scare guests away instead motivated the latter to stay on chanting songs of praise to Paul Biya. Militants came from all the 25 sections which the Cpdm counts in the region. Others travelled more than 24hrs from Ndian, Lebialem and Manyu where especially during this rainy season the roads are nightmarish. “We braved the bad roads and travelled overnight to reach here this afternoon because the business of the day is very capital that we could not afford to miss,” said Ndian I Ycpdm section, Philip Nyane Orume.
Representing the secretary general of Cpdm central committee, Bidoung Mpkatt congratulated the youths for their brilliance. In his words, “this mobilisation reflects your minds and your commitmentto ride along with someone you have chosen to ensure your future.”
This Hegza rally is a nationwide caravan of the Ycpdm. It began in Ebolowa where the South west was represented 18 of its 25 Ycpdm section presidents. Then it continued to Bamenda and Yaounde before converging on Buea last August 20. The South west Fako III Ycpdm president says “is a very important region in the Cameroon political sphere so we decided to take the bull by the horns.” From the various speeches delivered at the event, one thing was recurrent. “Paul is our champion, he masters the country and there is no reason why we should not continue with him.” To the Fako III section president, Charles Mbella Moki, “President Biya has over the years kept some of his most precious calabashes in the South west region. As Cpdm supporters let us light candles where there is darkness in order to avoid blaming darkness for our woes.”
The region held the prestigious prime minister post for 13 uninterrupted years, has sons and daughters of the region are in several ministerial and general manager functions such as Elvis Ngolle, Joseph Dion Ngute, Peter Agbor Tabi, Victor Arrey Mengot, Henry Njalla Quan, Obi Opkun and Humprey Ekema Monono  among many others. To him, the massive presence of Cpdm diehards at the Omar Bongo square was eloquent proof that their fidelity contract with Paul Biya is hitch free.
For his part the Cpdm political bureau member of the region, John Ebong Ngolle said “we are not tired of good things and that is why we are rallying behind the man who can give us those things.” In consonance with Mbella Moki who posited that it was a very bad thing not to be part of a good idea, Ebong Ngolle urged his young comrades of the region to remain vigilant, disciplined and wise as well as galvanise their elders who have not yet enrolled on the voters’ register to do so.To the Ycpdm national bureau president, Marie Lucienne Fouda Ndi, “our country is not a test field. We know our local realities and our champion, Paul Biya is he who has been addressing them over the years.”The success of this Hegza rally, Bidoung Mpkatt said is eloquent proof that the Ycpdm sections of the South west region are alert, dynamic and united to face the challenge of the forthcoming presidential poll.Biya and SWThe entire region feels indebted to Paul Biya, the man whom they say kept some of his most special calabashes with them. And like Ebong Ngolle put it, “to continue enjoying now is the time to show our gratitude for goodies received before asking for more.” From the on-going reforms at the anglo saxon Buea university to the amplification of work on the trans African highway that runs from Bamenda to Ekok through the completion of feasibility studies for the construction of an omnisports stadium as well as the Limbe shipyard, more would still come. And this only if we perform better than in the past, Mbome said. Following a classification that sanctioned Cpdm votes on the heels of the 2007 presidential poll, the South was region was ranked seventh. Out of the 358.493 registered voters, 287.374 actively voted with 3.078 blank ballots. Of the total votes, the Cpdm candidate scored 186.460 marking a win in relative terms of 65.58%. 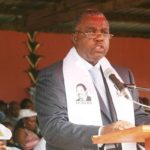