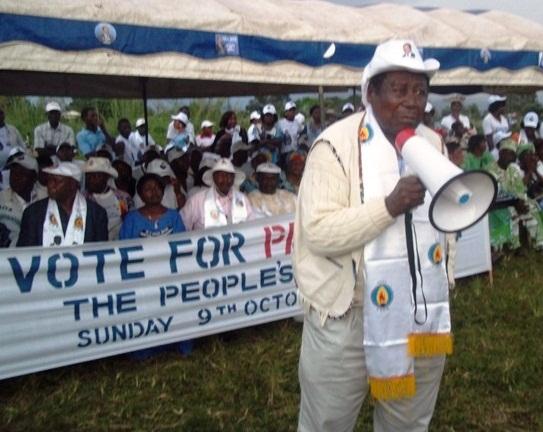 Across the ten regions of Cameroon, Cameroonians from all walks of life went to the polls yesterday October 9 to elect the person to lead the country for next seven years.

From emerging trends, the candidate of the Cameroon people’s democratic movement, the incumbent Paul Biya is leading the polls in and out of Cameroon. He wraps up this mandate under the banner of greater ambitions and opens up the upcoming one under the framework of grand realisations. Read the reports, interviews and commentaries of our filed reporters.

Formerly reputed for violence and massive destruction of property during elections, the people of Kumba yesterday demonstrated an unprecedented proof of political maturity as the voting exercise took place unperturbed.

To surprise of many, the electorate in Kumba has turned a new page in the history of “K-town”. The people have probably come to realise that politics is not violence. Yesterday’s voting exercise took place in a very peaceful and serene atmosphere. The whole place was calm.Very few people could be seen on the streets. Every place was closed except for the churches. Motorbikes were allowed to ply till 9:00am when all church services were expected to have been rounded off. Unlike in the past when the polling stations at Fiango and kossala used to be focal points of violence, yesterday was the direct opposite. Voting began here as early as 6:00am. Voters whose cards were not issued as well as others whose names were displaced from where they registered to elsewhere, were still given the opportunity to vote.  In Meme division, the Elecam coordination unit made it such that the former upon identifying their names on the voter’s list and presentation of national identity card, they were allowed to vote and a cross inscribed thumbnail. For their part those who had been displaced from their initial polling stations were reinstated while others whose situation could not be change for want of time, were simply made to converge on one spot and transported to their various polling stations. Under the stormy rain that poured on the city yesterday afternoon, voters could be seen trekking on the streets with umbrellas seeking their way to the polling stations. But, Elecam was heavily criticised here for poor organisation. Late Saturday night, five of the 147 polling stations of the Mbonge sub division received the consignment of ballot papers except that of the Cameroon people’s democratic movement, Cpdm. After serious protest from Cpdm top brass in the area the sub divisional officer intervened and the papers were hurriedly ferried in early yesterday. It is worth recalling that Mbonge has always been the bastion of the Cpdm in Meme. Back in Kumba, ballot papers got short in the Mambanda area while at the administrative seat of Up station, a woman was displaced from her initial polling station at kumba town came and discovered that some other person had voted on her name. As to how and why this happened, local Elecam officials were not available to comment at press time. FlashbackKumba’s electoral history is very dreaded. Since the re-launch of multiparty politics, no single election has held here without people losing lives. Some were not only well tortured, but robbed of their property. So many people especially Cpdm supporters saw their houses razed by tugs of the opposition Sdf. Meanwhile, others whose sympathy for the Cpdm was well known were simply prevented from voting. Amidst this chaos, opposition has always thrived here to the detriment of the Cpdm. But in all of that, the government kept developing the town. Upon upgrading it to a city council, its main access way to the Littoral region was tarred. Work is currently on course for a double carriage way between play fair junction and the Town green round about. At least all its subdivisions can boost of a bilingual high school, health centers, not to talk of primary schools. Meantime, feasibility studies for the building of the Loum – Kumba – Bakassi road have been completed. Prime minister Philemon Yang recently confirmed that the contract will be awarded very soon. “Why do you stay in Kumba and do not want good things for the town”, Nfon Mukete quizzed in fury.