“We did our best”We put in our best. I hope my people have learnt their lesson after these 16 years which they passed in the cold because of their poor election results for the Cpdm. We have no general manager, not to talk of ministers. It is in our interest to vote for Paul Biya so that Kumba moves forward. The sharing of the national cake is based on election results figures. If people are not helpful to you it is only natural that you too turn your back to them .Let’s stop being fooled. Progress has been made, and we need more. This country is blessed, I can assure you. The government is in the position to give us development. We need to make no mistakes. This is a time for us to repair the damage. I am glad that Elecam was created. This will enable us have a level playground. The watchword is vigilance. You are allies of the Cpdm and this is the time for us to show the support.

Otte Andrew Mofa, campaign leader, Mbonge“Victory is ours”We divided Mbonge sub division into seven zones in order to really penetrate the population with our candidate’s message. We campaigned door to door. We of the sub divisional campaign team went round supervising the work of the various teams that we sent out to the field. The turnout of voters at the polling stations here was massive and that assures us that victory is ours. Though Elecam messed us up at Kumba with most of our militants’ names not found on the register thus preventing them from voting. We are still very confident because we know how hard we have worked. Our people know that the perennial problem of bad roads we are suffering from can only be addressed by he who has been in power and knows these problems. And that is President Paul Biya. If we do not maintain him in power, who will come and tar us the Loum – Kumba – Bakassi road whose studies have already been completed.Victor Nkele Ngoh, Meme divisional team member“We had every reason to vote for Biya”Surprisingly, the election went on so well. The majority a the pooling stations we visited were calm. No violence was recorded. I proudly voted at the High ways polling station. Even the Social democratic front mayor who in the past was very un-collaborative ensured that all went on without violence. We have every reason to vote for Paul Biya because he is the one who will give us the longstanding development that we cherish in this city within the framework of his 2035 vision. That is the double carriage way he promised us near completion while the studies for the Loum – Kumba – Bakassi road have been completed and the contract will be awarded soon. 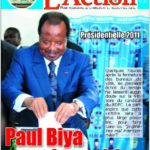 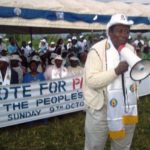