After the conduct of last Sunday’s presidential election, the various institutions charged with its handling are presently involved in vote counting. Counting begins by members of the local commission designated by voters whose names featured on the registers. To do the counting process, the ballot box of every polling station is opened and the number of envelops are verified. Each envelop is opened and the ballot paper is identified in an open manner and then registered. Any envelop or ballot paper bearing signs capable of disclosing the voter’s identity is strictly disqualified and such cases will be signaled in the report of the local voting commission. After the counting, the result of the polling station is announced. Two days after the vote, the report of the local commission is transmitted to the president of the divisional commission. For purposes of archarving, the original copy of this report is sent to the representative of Elections Cameroon by the president of the local voting commission. Next on the list are electoral disputes. Section 93 of the electoral law holds that the constitutional counsel looks at requests that call on partial or total cancelation of the electoral process, as may be suggested by the various candidates and political parties. Any application to have election(s) canceled is sent to the constitutional counsel at most three days after the closing of the voting process. The said counsel is free to accept or reject the request for cancelation, judging on how palpable the requests are. In case the election is canceled, the constitutional counsel informs the ministry of Territorial administration and decentralization. A new election will thus be organized within the next 20-40 days from the date of the announced annulment. The outgoing President of the Republic remains in power till the oath taking ceremony of the president elect. The registrar-in-chief of the Supreme court, Koé Amougou Appolinaire says “all protests and claims made in pursuance of the provisions of section 93 must reach the constitutional counsel within a maximum period of 72 jours from the closure of the polls”. After electoral disputes, the proclamation of results follows. In fact, section 98 is conclusive on this topic. The constitutional counsel certifies and proclaims the result of the presidential election at most 15 days after the closing date of the voting process. The results of the election are then published and inserted in the official gadget in the English and French languages. While waiting for the proclamation of results, a 35 man national vote counting commission has been put in place. Led by Clement Atangana, the commission is made up of two magistrates, four representatives of the administration, five from Elections Cameroon and twenty three from all the political parties that partook in last Sunday’s presidential election. The Cpdm representative is the Organization secretary, Ibrahim Talba Malla.  The whole process of the presidential election ends with the oath taking of the president elect. Section 101 of the electoral law stipulates that the elected president begins work 15 days after the proclamation of results by the constitutional counsel. He takes his oath of office before Cameroonians, in front of Members of Parliament (generally referred to as the people’s representatives), members of the constitutional counsel and those of the Supreme court in an official and solemn ceremony. For now, the Supreme court sits in lieu of the Constitutional counsel. The president of the National assembly receives the oath of the President of the Republic after a brief speech which ends with a couple of questions he puts forth to the president elect. The president elect is asked if he is ready to loyally carry out the duties that Cameroonians expect from him, before God and Man and whether he swears to conserve, protect and defend the constitution and the laws of the Republic of Cameroon, to ensure the general good of the nation, to support and defend unity, integrity and independence of the fatherland.  Standing in front of Cameroonians, with the right hand up and facing Members of Parliament, of the constitutional counsel and those of the Supreme court, the president elect takes the oath by answering that: “I do so swear”. For this year, the elected President of the Republic will take his oath of office by November 4, 2011 latest. 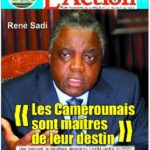