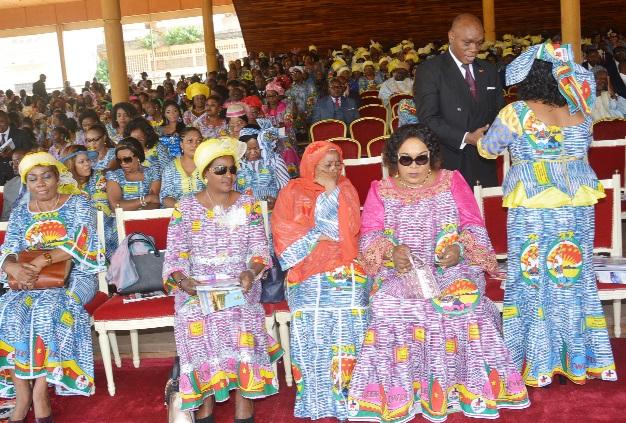 Cameroon’s First Lady and Honorary President of the Women’s Wing of the CPDM Chantal Biya, yesterday chaired the lively parade at the May 20th Boulevard, in which women of all walks of life participated.

Grandiose and beautiful better describe the parade of women colourfully clad in this year’s fabric for the women’s day commemoration. The arrival of Chantal Biya, Cameroon’s First Lady signaled the start of the march pass which was a culmination of week-long activities organized nationwide to evaluate the road covered as far as gender parity is concerned. Welcomed at the ceremonial ground by the Minister of Women’s Empowerment and the Family Marie Thérèse Abena Ondoa, Mrs. Chantal Biya further shook hands with members of government present and merrily saluted the women at the tribune.
The scorching sun did little to dissuade the sea of women from the various ministries and institutions who turned out to celebrate this year’s edition under the theme, “Women in the Changing World of Work: Planet 50-50 by 2030”. Despite calls for women partaking in the parade to rid themselves of heavy bags and avoid high heeled shoes, this year like in past ones had its share of fun. The long wait for the parade to begin obliged many to go bare foot in order to relieve their feet of pain from tight and high heeled shoes. As the women bearing the effigies of Paul and Chantal Biya and the national flag marched pass, a special square of the Lionesses and Lions led by Lily the mascot of the Female AFCON filed past and were applauded for their output during the African football jamboree. In silent competition, the women clothed in the blue and pink fabrics designed and accessorized diversely, took turns to march past the tribunes to the tunes plaid by the band. Women from the public and private sectors gathered under several wagons and proudly displayed themselves much to the joy and applause of onlookers. The various groups of women carried along banners on which were printed messages thanking the Head of State Paul Biya for the national gender policy which is guarantee for gender equality. Mindful of the crisis in the North West and South West regions, the women from the National Assembly on their banner avowed their support to President Biya in stating that Cameroon is one and indivisible. On another banner, it was clearly written that “for a 50-50 Cameroon, let’s uplift obstacles to women’s access to decision making”. The feast wasn’t exclusive to women as the male folk joined in to show support in the quest for equal opportunities for all. This explains one of the messages borne which read “I am a man/gender equality matters for me/I am HeForShe”. Stop to discrimination against women, yes to equality at work, and the list of messages went on and on varying according to the institutions and soliciting for more actions towards achieving gender parity by 2030.
At the close of the parade, the anthem of the woman was beautifully executed in English and French by a group of six women who called for equality, development and peace. While some women upon invitation took part in a luncheon offered by Chantal Biya, others returned home or to the different institutions to continue festivities. 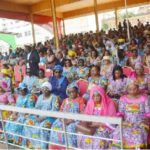