By empowering the woman and making her see beyond just being a mother and a wife, President Paul Biya has built the Cameroonian Woman strong by unearthing the talents that were hitherto hid in her.

Gone are the days when politics was a male dominated specificity, gone are those days when  a woman had no right to sit or make her voice heard where men were sitting or in the running of the affairs of the country. Today in Cameroon the woman occupies ministerial positions, they are Company directors, commanders in the army and they deliver the goods.
It took the clairvoyance of a leader, father and husband that Paul Biya is to see that being a woman is not synonymous to being weak. Though usually referred to as the weaker sex, Paul Biya knew better that if given the opportunity the woman would show forth qualities society had buried in her. In one of his speeches in Bamenda his “second home”, Paul Biya said “These new hopes require us henceforth to propose to Cameroonians, a new way of living together, a new understanding of their rights and obligations, a new notion of political militancy and a bolder step towards national integration, the guarantee for peace, stability and prosperity.”
In the CPDM party it is no longer a secret that the National President has this special place in his heart reserved for the woman and confident that their leader trusts them they are the back bone of the party as they are found functioning in every aspect of the day to day running of the party. Still in the party women are section presidents hence they coordinate the activities of the section and ensure its smooth running. In creating the women’s wing of the CPDM party Paul Biya was confident and he said “Auxiliary organs, for their part, do not lack initiative. The WCPDM is a symbol of strong feminine solidarity”. President Paul Biya and the New deal government has also defined major guide lines for the role of women with the institution of activities for women’s promotion and family protection and promotion to bring on scene a full ministry in charge of women empowerment and the family.
With all of these and more, the  Cameroonian woman is today proud to belong to her nation not just as an observer or a baby making factory but a partner in development and the nation building process alongside the men thanks to President Paul Biya. In the execution of their missions they provide support to their husbands. Their closeness and easy to relate with persons of all ages in that they are first of all mothers and wives cuts across giving them an enviable place in society. 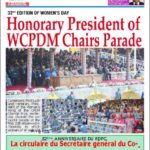 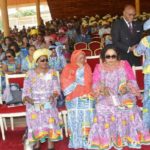