Cognisant of the fact that it would be useless registering on voters’ rolls without collecting the cards, the authorities that be are finding ways of easing withdrawals of the said cards by the owners.

Registration on voters’ rolls is ongoing and ELECAM officials are on the offensive to make the most of the available time to woo more potential voters to their stands. The campaigns have been numerous and the results are satisfying but as 2018 is an electoral year, the aspiration to contribute to the smooth organisation of elections is greater. A total of 6.6 million voters were registered in 2017and the aim to hit a new score this year. Until now, the election organising body has been combing nooks and crannies of various localities in search of persons whose names have not featured in their data or who have relocated to other places. Meeting people in market places, ceremonial grounds and even at funerals have been strategies which the stakeholders have been using to canvass for more voters. Sometime last year, there were reports of people abandoning their voters’ cards after they had been established.

Given that the cards are not automatically handed to the owners after they have been made, most people either forget to go collect the cards with some completely abandoning them at the ELECAM offices. Meanwhile it has been remarked that people who get registered away from their residential areas even after specifying their council areas where they ought to vote often times forget to go collect their cards. The struggle is not only to see the number of registered voters increase but also for the cards to be withdrawn in time for the elections, without which they cannot vote.

Talking on the national radio last Monday 16 2018 about their preparedness for the 2018 elections, Abdoulaye Babale ELECAM’s General Manager quipped that they were up to challenge, saying that there will be 26 000 polling stations nationwide. He reassured that there will be sufficient ballot boxes. The security issues in some localities has been taken note of, and this explains why the General manager highlighted the possibility of changing polling stations to sites which are more secure to ensure that the population gets to vote in safety. ELECAM’s boss says there are going to be mobile caravans to distribute voters’ cards to those who for one reason or another have not collected them as well as radio and tv programs to sensitize Cameroonians to endeavour to collect their voter’s card. 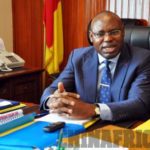