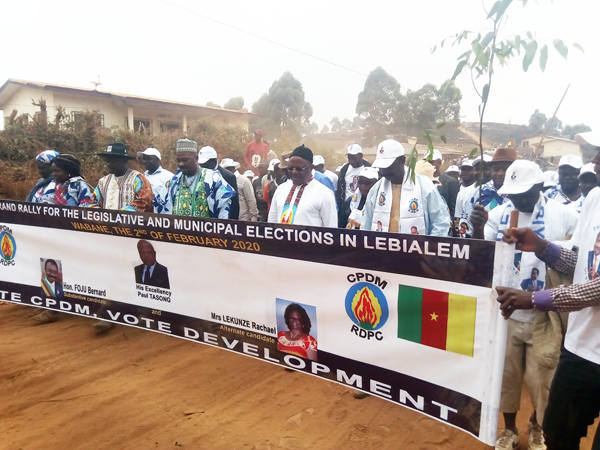 Minister Paul Tasong and his high power delegation braved all odds to launch a giant campaign in Wabane.

Sunday February 2, 2020, the population of Wabane subdivision was taken by storm as a high power delegation of CPDM officials headed by the Divisional campaign manager, Paul Tasong launched campaigns for the legislative and municipal elections. The campaign took place under the theme » A united, Democratic, strong and prosperous Lebialem » at the community field of Government Technical College, Ntemnzem, Wabane. A crowd of more than two thousand militants, from the three subdivisions of Lebialem, joined the campaign team to demonstrate a peaceful March, brandishing peace plant symbolising the return of peace in the Division. This turnout has debunked the notion that Lebialem is deserted. There is life, with the vibrant population going about their activities freely. The messages from the different speakers boiled down to one, that of rallying behind the ruling CPDM party since it’s the only party that can bring the necessary transformation in Lebialem. The youth president of Wabane and the WCPDM all hammered on the need for peace, which is the only avenue by which the much needed development will be achieved. The issue of roads and electricity especially in Wabane and Lebialem division was also brought to the attention of the officials. To benefit from all these opportunities, youths who have taken up arms were called upon to drop them, leave the bushes and return home so that peace can be restored. It is only a vote for the CPDM party that the future of Lebialem division can be guaranteed. A vote for the CPDM is a vote for greater achievement and more opportunities for the Division. Only a massive vote will enable the minister secure his stay in government.

The youths pledge to henceforth protect their division by rising against separatist fighters, who have resorted to destroy all development projects in Lebialem.

As for the other two opposition parties running for the parliamentary seat, the CPDM militants agreed that they were political orphans who are out to create confusion and as such must not  earn even a single vote.

After fifty years, a son of Lebialem has been appointed minister, and it’s the beginning of more opportunities. The take home message at the end of the rally is for militants to turn out in their numbers and vote for the CPDM come February 9.

Various traditional dance groups from Lebialem and the northwest region spiced up the grand rally which ended with a peace March across Wabane -Mbelenka market square. 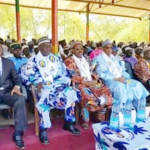 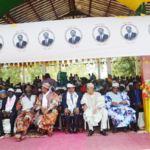