Following the renewal of bureaus of Cells, Branches, Subsections and Sections, the new phase of the process is the examination of reports from electoral commissions by the Central Supervisory Commission.

The effervescence that characterised various localities with regards to the renewal of executives of CPDM basic organs these past months has died down with the emergence of new bureaus. While some executives were re-elected to continue the work they have been doing, others have undergone serious metamorphosis with complete overhauls. With the activities earmarked in the renewal calendar having been stricken off, it is now the turn of the Central Supervisory Commission to examine reports sent in by the various electoral commissions.
As it would have been expected with any other elections, disgruntled militants have voiced their concerns in complaints which for some have been deposited at the levels of regions while others went the extra mile of forwarding copies directly to the Central Committee of the Party. According to one of the members of the Central Supervisory Committee, such complaints received at their level were resent to the electoral commissions of the concerned area for scrutiny and deliberation. Accordingly, complaints are to be lodged at the grass root level for the authorities in charge to study and find solutions before sending conclusions to hierarchy. The Central supervisory commission is now concerned with perusing reports from the field on the general conduct of the elections. This evaluation stage will help them determine if responses given by grassroot authorities to complaints tabled are satisfying or not.
While the rundown of the executives are being compiled, all eyes are turned towards the Central Committee, as the Secretary General is expected to take the decision approving the election of Section bureaus.
The two-month long renewal exercise is drawing to its close and thanks to the commitment and active participation of militants, men women and youths, the CPDM has through the process revamped its base in preparation for future political stakes. 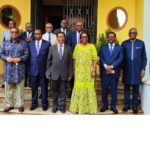 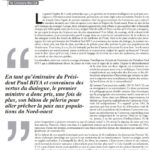