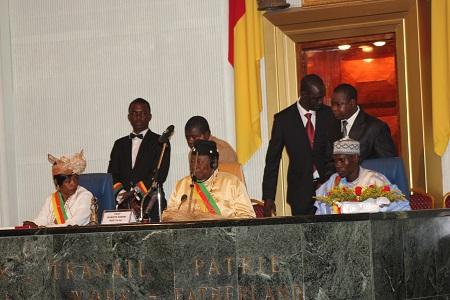 The eldest member of Senate, Nfon Victor Mukete chaired the first statutory session of the Senate, yesterday May 14, 2013 at 4:00pm in the hemicycle of the National Assembly.

Solemnity and seriousness marked the first ever opening session of the Senate in the history of Cameroon. The ceremony began with the reading of results of the April 14, 2013 senatorial elections as proclaimed by the Supreme Court sitting in for the constitutional council and the reading of the presidential decree of May 8, 2013 appointing 30 senators. This was done by the Vice Prime Minister and Minister in charge of relations with assemblies, Amadou Ali. This was followed by the putting on of the sash by senators. Made up of colours of Cameroon’s flag (green, red, yellow), they wore the sash from left to right with the flag’s star lying on their chests. With this new outlook, the 100 members of the upper house of Parliament went ahead to establish the provisionary bureau of the Senate. An exercise which was coordinated by minister Amadou Ali. In line with parliamentary tradition, the dean of the house is the bureau’s president and is assisted by the two youngest members of the house. “After a severe scrutiny of the 100 files, it emerged that, Nfor Victor Mukete, born in 1918 in Kumba is the eldest member of the house”, announced Amadou Ali. Further on, he said, “the two youngest members of the house are Mrs Aboui Marlyse and Mr Ahmadou Tidjani”, both born in 1973. The trio was given several rounds of applause as they moved up to the hemicycle’s rostrum. With the provisionary bureau set, Nfon Victor Mukete took the floor for his maiden speech in Cameroon’s Senate.  At the outset, he promised that “the provisionary bureau will use wisdom, foresight and sagacity during the first statutory session of the Senate”. Describing the Senate as “the house of the wise”, Nfon Victor Mukete said, “the President of the Republic has always been concerned about the setting up of the Senate and thanks to this, legislative power in Cameroon will now be exercised by a complete parliament”. With this, he reminded his peers that “it is absolute time for resolute action”. Talking about the importance of the Senate, he opined that “the advent of the upper house of parliament in our country shall keep Cameroon present among the list of modern nations”. To him, “this is the fruition of one of the greater achievements of the current seven year mandate of the President of the Republic”. After post election euphoria and the merry making which followed the appointment of 30 senators, the dean of the Senate advised members of the house to “get ready to work and collaborate with the lower house of parliament in a bid to transform Cameroon into a better place. We count on the availability of members of the National Assembly and we wish that the co-existence of the two chambers will be helpful to the consolidation of Cameroon’s democratic process”. To measure up to their awesome but exciting challenges, he called on all senators to “put general interest at the centre of all their initiatives”. With their varying professional backgrounds, senators are expected to always see the big picture and deliver results. According to the dean of the house, “only the quality of the job of senators will answer those who are skeptical about our coming to stage”. His 30 minutes speech ended with a call for representatives of all political parties represented at the Senate to meet at the Ngum Jua hall of the National Assembly in a bid to make up a commission aimed at brainstorming on the elaboration of the standing orders of the upper house of parliament. Sources from the Cameroon People’s Democratic Movement reveal that the party’s representatives in this commission would be people who have a legislative experience “either as former members of the National Assembly or as former ministers”. After the elaboration of these internal regulations, parliamentary business will continue with the election of a house’s president and other bureau members. The session was attended by members of government led by the Prime Minister and Head of Government Philemon Yang, members of the National Assembly including the speaker Rt Hon Cavaye Yeguie Djibril, members of the diplomatic corps, officials of the Supreme Court, the president of Elections Cameroon Dr Fonkam Azu’u, the Government Delegate to the Yaounde City council Gilbert Tsimi Evouna, the first vice president of the Social Democratic Front Joshua Ossi, among others. 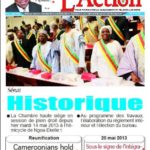 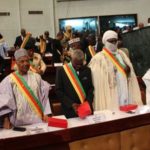