From the regional level to the sectors, the CPDM campaign is bent on convincing fence sitters and timid voters.

As campaigns draw to a close, the ruling party is fighting to swell the numbers of voters in favour of its list. At the sector level carved out small campaign units, those picked to front for the candidates of the CPDM are knocking at the doors of potential voters. The party is also convincing the population to come out en masse and exercise their civic right. In the Northwest region, the scare from armed groups could force potential voters to stay indoors. But, the CPDM is encouraging the population to ignore the band on elections from the self-styled leaders of the armed separatist movement. These groups intimate and threaten the population not to turn out for the elections. Cameroon authorities have brought in more troops into the two regions to secure the elections, the Minister of Territorial Administration had stated in a press conference. The Northwest CPDM campaign is persuading the voters to show up at the polls. In addition, arguing that the military will protect them. In addition, CPDM campaigners are hammering on the stakes of the 9 February twin elections. A new page of local development would open after 9 February 2020. Local councils will have more power and huge funds to run the municipalities. Regional councils are in the pipe and government could set up the councils after the municipal and legislative elections. Members of the divisional and communal electoral campaign committees that could not permanently stay in their areas of origin have found safe ways to reach their places and vote. Via social media, campaign teams continue to plan and execute their strategies. Nkambe and Misaje have successfully held daily rallies without attacks. The CPDM continues to make incursions into areas considered “dangerous” and “hostile” to the party. On Wednesday, the Section President of Nkum, Yenawuni Adriana and her team launched campaigns in Tatum – where troops killed the dreaded selfstyled ‘general’ Cha Cha in late January. Unlike the 2018 presidential elections, the CPDM was more visible on the field and the Party could sweep the councils and win more parliamentary seats than in 2013. 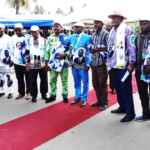