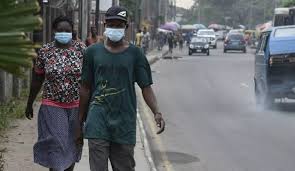 The municipality is using the awareness weapon to wage a war against the pandemic.

Shey Musa Nfor, Mayor of Nkambe has mobilized all his staff and the council is in its second week of massive sensitization against COVID-19 in the municipality. Mayor Shey Musa Nfor, a month in office, is using private funds to fight the pandemic. The councillors cannot sit for a session because of government restrictions of 17 March 2020.
He launched the campaign against the spread of the Coronavirus in a big style. It began with a radio talk show over Donga Mantung Community Radio followed by open-air sensitization along the streets of the town, including a demonstration on how to prevent COVID-19.
Thanks to the largesse of the mayor, Nkambe town counts 30 points where at least 30 movable 30 litre-buckets with inbuilt taps, liquid soap and hand sanitizers are placed. A council staff dressed for the rains in gloves, raincoats and boots mounts the point to serve the population. The goal is to have the population respect the WHO hygiene rules and ensure that all hands in Nkambe are washed with soap or sanitized. The ‘washing points’ are in areas of congregation such as markets, motor park , SDO ‘s office, fon palaces and town hall.
Mayor Shey Musa Nfor has forged a synergy with the District health service and hospital, elite, and the administration to prevent the Coronavirus from making a stopover in the Nkambe municipality. Health authorities and administrators have bought his community-oriented plan.
Nkambe is without power for a month and faces short water supply, which could undermine the Mayor’s fight against the spread of this virus. Shey Musa Nfor has bought a generator and fuel to run the radio at prime time every day, while waiting for power to return. The council is working on other measures before April ends.

Beyond Nkambe town
The mayor is spreading the fight to other parts of the municipality – villages of the Nkambe council that covers the sub division. A van and megaphones, provided by the mayor are used to sensitize the population.The mayor has also embraced the specificities of the Fulani culture in the fight against COVID-19. For example, the Fulanis eat from a common dish in solidarity – not a healthy practice with COVID-19. To reach out to this community, the council targets them at ‘cow markets’. Here, Ardos and other opinion leaders of the community are expected to carry the message to others up the remote hills. In addition, the council is using trade unions of motorbike riders reach remote areas of the municipality.
These measures by the council could be futile if the population ignores physical distancing during funerals. And, the council is sounding alarm bells. 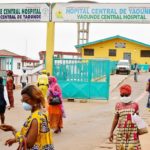 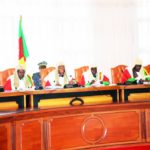