Traditional rulers of the 10 Bafaw villages in Meme Division, kingmakers, traditional council members, notables, and the non-indigenous population in Kumba, have all pledged to stand behind the new chief and give him the maximum collaboration needed to succeed.
The coronation ceremony that took place last April 24, was a landmark event in the history of the Bafaw tribe. The smooth royal transition from Senator Nfon V.E Mukete, to his youngest son, Nfon Ekoko mukete IV, was validated by the various traditional classes, thereby putting an end to all internal wrangling that have been going on ever since the chieftaincy stool was transferred.
The gods of the Bafaw tribe were all evoked with ancestral blessings poured on the new first class Nfon. The God fearing traditional ruler is bent on blending Christianity with traditional beliefs, on the notion that both are geared towards service to the population. The Nfon will focused on modernizing the Bafaw culture, promoting solidarity among settlers and acting as servant to the people. The dynamic, innovative and business driven Nfon will use his wealth of experience in the business field to galvanize youths into exploring our rich heritage, transforming natural resources to finished goods, in order to avoid the shock and dangerous adventure of traveling abroad.
The President of the South West House of Chiefs, HRH chief Dr Atem Ebako, the President of the South West regional Assembly, Elango Zacheus Bakuma, the Bishop of Kumba Diocese, a battery of clergy as well as former schoolmates of Sasse College, all joined their voices to wish the new chief a wonderful and successful reign.
While the population await the official burial program of late Senator Nfon V.E Mukete, it is traditionally confirmed and sealed that the palace does not have any vacuum, and that the transition was one ordained by the gods.
The present Nfon Ekoko Mukete IV is 55 years old and a father of 4 kids. He is the vice president of the Cameroon chamber of commerce, Board chair of the Union of Bank of Africa and the Honorary Turkish Consul for Cameroon. 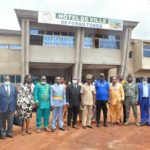