The heat is on as party officials, preparatory commissions and journalists put their hands on the wheel to ensure that all is set for the congress announced for the 15 and 16 of September.

Since the announcement of the date of the 3rd ordinary congress of the Cpdm, militants, party officials in charge of organization as well as journalists have hardly had a moment’s rest. At the Yaoundé conference centre, seat of the Cameroon people’s democratic movement, the buzz can be compared to that in a beehive, as the party’s officials knock on doors and crosscheck documents to ensure that things are on the right footing. The announcement of the decree convening the electorate on September 9 has come to add the fever already reigning at the party’s seat.
Since Monday, The number of people going up and down the stairs of the building has suddenly witnessed a jump despite the public holiday that other Cameroonians have been observing for the past two days. Hardly have the offices been opened than people have come knocking seeking copies of the decree announcing the congress or just clarifications about the event. Some section presidents have also been spotted struggling to get the party’s fabric for their militants in readiness for the long awaited event.
The Secretary General of the Cpdm,  Réné Sadi has been making himself available for consultation by those in charge, arriving at his office on the 6th floor of the building more often than usual. The communication secretary at the Central committee Professor Jaques Fame Ndongo, has been granting numerous audiences be they to militants or even journalists of the party’s newspaper, giving out directives as concerns the congress. At the time of this report, Professor Fame Ndongo was at hand to give a word of encouragement to the journalists who have been working since last Friday’s announcement, modifying already written articles and adding freshly gotten information.
The website of the Cpdm, that of  L’Action newspaper and the blog of the congress are witnessing an increase in the number of visitors in quest of more information. An estimated 50 people visit the websites per hour, a thing that will escalate as the days of the congress narrow down. Accreditation for journalists who want to cover the event are already  being sought for Website hosts  have put up forms to be filled oug by those concerned. http://congres2011.rdpcpdm.cm is the address that has been put up for consultation on information concerning the congress. The party’s officials are on the offensive to make the event go down the annals of the party’s history, reason why all is being done to give it a superb finishing. 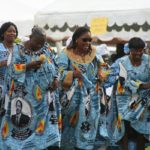