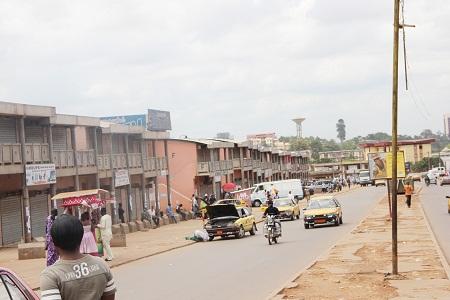 The acquisition of stores that have been constructed at the Mokolo market remain a hurdle for most vendors who say the prices are quite huge for what they have to sell.

The Mokolo market area has been a desert this past week following the
June 16th crackdown that led to the loss of life. The clampdown
involving the forces of law and order and the city council officials saw
the temporary closing of the market, where for some time now, vendors
had decided to transform the roads to their exhibition spaces, thereby
hindering the free movement of people and vehicles.

The hawkers argued that the lack of space within the market makes it impossible for them to quit the sidewalks in Mokolo. To solve the problem, Gilbert Tsimi Evouna, the Government Delegate to the Yaounde City Council indicated that government plans to create many more specialized and wholesale markets in a bid to better regulate the functioning at markets in Yaoundé.  But the temporary closure of the market has not only brought the authorities of the city council and the concerned traders on a negotiation table, but has equally brought to light the aching issue of expensive stores at the market.If the vendors have been occupying the pavements to sell their goods, it is as a result of having no second option, one of them confirmed. The problem they say, is that the shops that have been constructed are not affordable to everybody. Augustin kemtche makes ends meet by selling ladies shoes and slippers. To him, “it is a good thing that the city council wants to put order in the market. My problem is, when the market will be reopened, I still will have nowhere else to put my goods for sale because I cannot get a shop of my own in the market. They are too expensive and for my little merchandise, I doubt that customers would cope with the new price tag I will put on my goods if I happen to get a shop.” Like this trader, many are the complaints, that the shops are given out at exorbitant prices and for petit traders like them who cannot afford it; the tarmac is their only option.One of the traders in the market who preferred to be anonymous said confessed that “a disturbing phenomenon is that some people buy many of the shops and then resell to others at high prices making us to keep accusing the city council workers. There is some sort of network and when you are not well connected, it is difficult for you to have a shop in the market”.The measures that have been taken to resolve the issues at the market like the partition of the market into 7 sectors and the appointment of heads of these sectors may still face some difficult implantation, if the shops meant to be occupied by traders remain empty due to their expensive acquisition. As the market opens its doors tomorrow, it is hoped that not only will the traders and hawkers keep their own part of the bargain, but the authorities as well, in ensuring that the plight of the people who are only struggling to make ends meet be solved.
Claudette Chin