Curtains closed on the first session of the year last week, after seven bills debated and adopted, among other activities of the two chambers.

Contrary to other newspaper reports which tagged the session as a familiar tune, the seven bills, trainings and other activities which took place this March session were something to write home about. Of the seven bills, five were international conventions three of which have a direct bearing on the lives of Cameroonians. For example, the bill on factoring defended in both Houses by the Minister of Finance; Alamine Ousmane Mey opens a new window of financing businesses especially small and medium enterprises. More than 90 % of businesses in Cameroon are SMEs, unable to grow because financing is hard to get. “We have come out to adopt treaties which have been signed between Cameroon and other countries, a sign that we agree to cooperation. President Biya wants to make sure that we move at the same pace with other countries with a vision to become emerging countries with full democratic status. Take for example the COTECO bill which was sent in, likewise that of fighting crime between Cameroon and Spain. These are meant to create permanent structures to make sure that life is easier for Cameroonians and hinder the flow of emigrants from one country to the other (Cameroon and Spain) without checks and balances and further avoid a lawless area.” said, Senator Nfor Tabetando Cpdm from Manyu Division in the South West Region.It was also a session to quiz government action. No doubt, ministers were on the grill at the National Assembly and the Senate. Lawmakers got answers to their worries. Rene Sadi, the Minister of Territorial Administration and Decentralization revealed that mayors will soon be paid indemnities. Often mayors were caught in the web of corrupt practices, acts blamed on their unsalaried status.  Likewise, Laurant Esso, Minister of Justice and Keeper of the Seal said, the anti-graft drive, named “operation sparrow hawk” has recovered 2.4 billion francs CFA.The March session was also marked by calls to action. MPs are known as grass root politicians, in regular contact with the population at their different constituencies. Based on this, the Minister of Women Empowerment and the Family, Prof. Marie Therese Abena Ondoua was in parliament to speak to MPs and senators about the inhumane female genital mutilation (FGM) practice, yet to be eradicated despite efforts. FGM is common in some villages in the Far North, East and South West region, and the United Nations puts the practice at 1.4%. In order to control government action, legislators need to master the policy in action. To sharpen the understanding of senators on the new form of budgeting, a seminar on “budget programme” was organised and experts drilled senators on the new system.
Both houses also scored points on the international scene, putting Cameroon on the limelight. For the first time, a non –European was voted secretary general of the Inter-Parliamentary Union (IPU). Martin Chungong, a Cameroonian was voted at the 130th Assembly of the body that held in Geneva from 17 to 20 March, 2014. IPU is 125 years old. Same, Senator Roger Mbassa Ndine was elected President of the Pilot Committee to put in place the Network of African Parliamentarians for the Evaluation of Development. In the lower house, Honourable Roger Nkodo Dang was elected first vice-president of the Panafrican Parliament. These wins outside the country, are owed to the invisible hand of the Head of State, Paul Biya that supported their files. Besides, it was the second session since the parliament of Cameroon wore the bicameral cap. Legislators gained more experience in the movement of bills through both houses. “The session helped to consolidate our bicameralism. Everybody will give a pass mark to the process of passing legislation between the two houses,” said Honourable Ngahane Isaac, Cpdm Mp for Wouri-East.
Unfortunately, the March session was not only roses as death hit both houses. At the upper house, Cpdm Senator Fon Fontem Njifua, the traditional ruler of Fontem village in the Lebialem Division of the South West Region went “missing” on April 2, 2013. In Lebialem tradition, same as in the grass field, a Fon never dies but is said to be missing. “His death left me agape and my eyes flourish with tears (he observes a sudden pause). I lack words to express, what the South West Cheifs and the Senate will miss about him.  To the senate it is a lost, you can judge from the attributes of the Senate President about his character, that kind of a person you cannot cave him out,” his friend Chief Tabetando thinks of him.
Meanwhile in the lower house, the Cpdm Mp, Jean Claude Mpacko Kotto of Mungo-South constituency in the Littoral Region died March 19. Legislators in both houses through the voices of their Presidents paid homage to the deceased. However, both houses want to treat more bills touching the lives of Cameroonians. 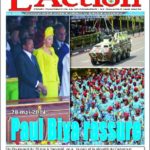