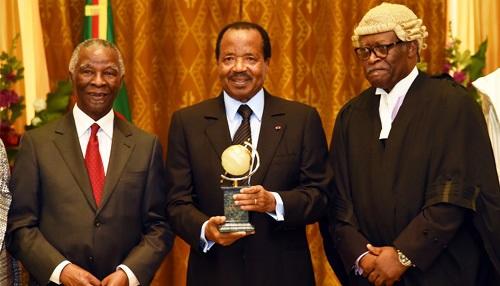 The Head of State of Cameroon was on Friday June, 2014 awarded a prize by the Pan African Lawyers Union (PALU) for his prime role in the peaceful resolution of the Bakassi peninsula crisis.

After the former Secretary General of the UN Kofi Annan and former President of Nigeria Olusegun Obasanjo, it was the turn of Paul Biya to be recongnised for his input in the peaceful resolution of the Bakassi conflict.Accepting the prize, the Head of State said the use of law was the best option than force in resolving conflicts. “It is therefore possible to achieve peace on the basis of law; provided, however, that force gives way to law; provided also that States recognize the supremacy of international law and the pre-eminent role of the United Nations,” Paul Biya declared while regretting that Africa glowed as an example of a conflict-torn continent, as epitomized by the tragic situation presently faced by the Central African Republic. Former President of South Africa Thabo Mbeki, now Chair of the AU-UN High level Panel on illicit financial flows from Africa, was at Unity Place to handover the award to President Paul Biya. He flew into the country on Thursday. He was in Cameroon to take part in PALU’s Triennial General Assembly and Conference in Yaoundé on capital flight and was accompanied to the Presidency by members of the association, headed by their outgoing President, Cameroon born Akere Muna. Biya FashionOn August 14, 2013, Cameroon regained full sovereignty over the Bakassi Peninsula, 20 years after the face-off with Nigeria. In effect, the swampy peninsula, rich in oil and gas, and seating on an area of 1000Km2 was occupied by the Nigerian administration and population who considered the land theirs. Faced with this hold-up, the Cameroon authorities drew the attention of Abuja on the need to withdraw from the land. Nigeria denied and picked up arms to insist on its dominion over the peninsula.  President Paul Biya unwelcomed a stand –off between both armies, and opted for the rule of law and decided to bring the matter before the International Court of Justice at the Hague on the illegal occupation by Nigeria and sought for a peaceful means on the dispute.On October 10, 2002, a ruling of the ICJ recognised Cameroon’s sovereignty over the Bakassi Peninsula, a long road to full control area had just begun. It was on June 12, 2006 that the Green tree accord was signed to pave the way for the implementation of the ruling. But first a key point, the Heads of State of Nigeria and Cameroon- Paul Biya and Olusegun Obasanjo, under the auspices of the UN scribe Kofi Annan, met four times. These meetings were to de-escalate the situation before and after the verdict of ICJ. In the end, on August 14, 2013 in the city of Calabar, the capital of the Cross River State in Nigeria, Obasanjo’s country ceded full powers over the peninsula to Cameroon. The Biya method won the admiration of PALU who decided in 2009 to award a prize in recognition of this rare peaceful resolution in troubled Africa to Paul Biya and co-actors. Before now, the other two actors; Kofi Annan and Olusegun Obasanjo had received their awards and because Bakassi only became Cameroon in 2013, PALU put Biya’s turn on hold with his say-so. “The logic is simple. It is a prize awarded to the three principal actors in the resolution of the boarder conflict of Bakassi… I think the logic of the Cameroonian President was to first see the dispute completely settled. And, it was only in 2013 that it (dispute) was closed,” Barister Akere Muna explained the delay.Also, in 2014 the African Union released a statement, in which the body congratulated the three main actors in the peaceful resolution of the conflict, according to Akere Muna, the union of lawyers saw this year as a unique chance to hand over the prize. 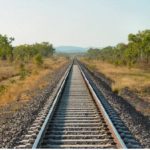