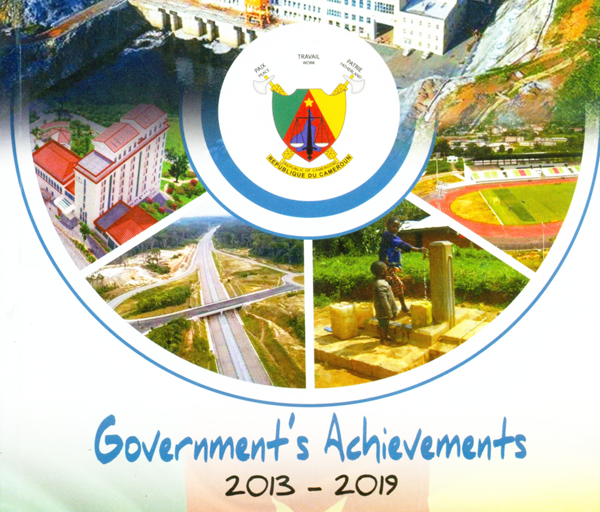 In a bid to ensure that electors go to the polls convinced of what they stand to gain from the CPDM led government, the Prime minister has published a book showing some of government’s achievements for the last seven years.

The book which opens with an excerpt of the Head of State’s message to the nation on December 31 2015, President Biya acknowledged that “although the task is huge and  the projects numerous,  I firmly believe we can make giant strides forward”. No nation is built by one man nor in a day.  However, with a sense of commitment and the contribution of all, a great nation is built. President Paul Biya in his clairvoyance has always called on all to bring in their contributions for the desired greater achievements. “Considering the determination and patriotic commitment of each and every one, I am convinced that we can meet the challenge, in the interest of all.  We should not miss out on this defining moment,” The head of State said in one of his speeches. It is in this light that he tries to put the right persons at the right places to foster his dream and the result are palpable. ‘Government’s achievement, 2013-2019’ produced by the Prime minister’s Office illustrates the different projects that government has realised within the 2013-2019 period. The 166-page document published in English and French on gloss paper presents how far Cameroon has come. The document is sub divided into two main areas namely; government’s achievements at the national level and the achievements under local development. All of these elaborated region by region with a conclusion on the 166th page. It is an in depth journey into the heart of Cameroon through the projects and actions carried out both directly by government and indirectly by regional and local authorities. Development actions characterise all ten regions with the fifty-eight (58) divisions that make up Cameroon and the three hundred and sixty councils of the country. Infrastructural progress is also highlighted with emphasis on roads, water and energy supply.  The education and health sector notwithstanding. The political landscape, better access to information and modern electronic means of communication made possible by the near complete interconnection of the whole territory is also showcased. The peace and security especially in the Far North, the North West and South West regions feature prominently with reassuring certainty that the future is bright. With the hope of transparently showing the will of the government to push, forward the dream of the Head of State to bring Cameroon to emergence, the February 9, 2020 legislative and municipal elections are another opportunity given to Cameroonians to choose the right persons who must help Cameroon reach its development bead. This document is proof of government’s resolution to build Cameroon with all and for all.

Registration on voters lists : CPDM always on the fore