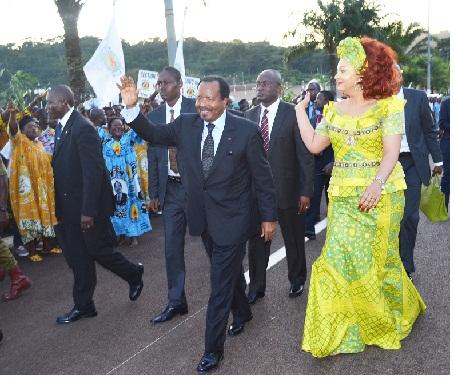 The heart warming reception given to First Lady Chantal Biya and her husband Paul Biya last Monday September 10, 2012 surpassed all other home comings ever recorded.

The warm welcome reserved for the presidential couple after a private sojourn abroad from the tarmac of the Nsimalen airport to the streets of Yaoundé, will remain in many minds as the city dwellers lined the roads in waiting for “Mama Chantal” as she is fondly called.The Nsimalen international airport was jammed to capacity by members of government, CERAC women and the top brass of the ruling CPDM party. Militants as well as dance groups representing the ten regions of the country added zeal in their drumming, to show the importance of this homecoming that will go down the annals of history.Head of State Paul Biya and the First Lady Chantal were presented bouquets of flowers at the foot of the plane. The smiles on all the faces and even on those of top personalities was prove of the love they all held for this couple, especially for Madam Chantal Biya who has been absent out of the country for quite some time. The population at the airport went frenzy with shouts of joy as the beautiful first lady, looking bright as ever emerged from the plane greeting the shouts of joy with her warm and long missed smile.The excitement reached its peak when the Presidential Couple moved into the courtyard to acknowledge the presence of the militants and the dance groups. The dancing frenzy was a very eloquent way of saying welcome home.While President Paul Biya granted brief audiences to the Speaker of the National Assembly, the Prime Minister and the Secretary General at the Presidency of the Republic, First Lady Chantal Biya had good moments with the spouses of the close collaborators of the Head of State, and equally received some people in audience.The motorcade drove through the city of Yaoundé where crowds of CPDM militants and curious onlookers turned out in their numbers to welcome their leader and his wife back home. This popular communion continued right up to the gates of Unity Palace where the President and Madam Chantal Biya came out of their vehicle and moved through the crowds of cheering and jubilant militants. It would be remembered that not only was the entire government mobilised but also delegations from the regions were on hand to represent the people of that area to show their love for the first couple.Traditionally, the head of state has been accompanied by his wife to important events but the last months that saw President Biya laying foundation stones for the kick off of some of the country’s major projects without his wife raised many brows. Given that the First Lady’s last public appearance dates back to March when she presided at women’s day festivities at the 20th may boulevard. Her return dispels rumours that have been fuelling discussions all over the country about her where about. The mother of the nation comes back home bright and in good health, much to the satisfaction of her admirers. The admiration for the First Lady, whose humanitarian works leave no one indifferent, goes forth to show how much Cameroonians hold her in high esteem. Many Cameroonians have expressed their happiness at seeing the First Lady back home and in good health, confirming the adage that absence makes the heart grow fonder. The presidential couple regaining the Unity Palace last Monday lays to rest the worries that lucky enough did not deteriorate to something worse, leaving detractors who had painted horror images of Mama Chantal’s absence with nothing more to say. Cameroonians have gone back to their daily concerns rest assured of the First lady’s safety that had been put to question by evil minds. 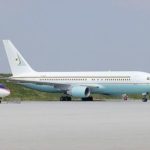