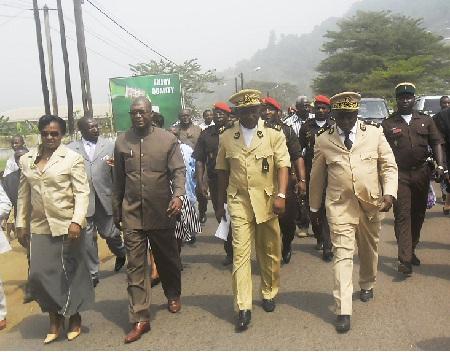 The money has been earmarked by government to prepare Buea, Limbe, Tiko and Kumba ahead of the golden jubilee of Cameroon’s reunification billed for later this year.

Buea, the regional capital and host of the event has been awarded projects worth FCFA 5.569 billion. Neighboring Limbe which will host most of the guests has FCFA 2.9 billion worth of projects while Kumba has a single project estimated at FCFA 1.4 billion. In Buea scores of the earmarked works are on course at a satisfactory rate of execution while others which were recently agreed upon are due to commence before this week runs out. During a joint mission undertaken from Wednesday January 08 – 10, 2013 by the Housing and urban development minister, Jean Claude Mbwentchou and his colleague of State property, land tenure and surveys, Jacqueline Koung à Besike, both ministers observed that work was satisfactorily going on at some sites while at others it was the direct opposite. Rehabilitation and extension works at the Mountain hotel are near completion. Engineers told ministers Mbwentchou and Koung à Biseke that work was 96 % executed. Some of the rooms were already being equipped while others were receiving the last coat of paint. The swimming pool is set just like the mini sport facility comprising basketball, lawn tennis and handball courts. The now fenced and beautified facility counts 84 high standard rooms. Directly opposite is the Parliamentarian flat where work is almost at a standstill. According to Governor Bernard Okalia Bilai, “nothing has changed as compared to what I saw here two months ago when I visited this site.” Disappointed with the contractor who is said to be a highly placed law maker at Cameroon’s national assembly, minister Mbwentchou emphasized that “there would be no extension of deadline. We have to receive the completed works latest March 31, 2013.” It is alleged the contractor here lacks the finance to proceed with work. Work here is estimated at a little over a billion FCFA for the rehabilitation and equipment of 20 rooms, building of a snack bar restaurant, an ultra modern laundry facility and the erection of a fence round the structure. The Chinese executing the Mountain hotel contract for their part say, “though we are at 96%, we have received just 30% of our fee. But we keep investing our money because we think it’s important for us to respect the deadline.” Directly opposite the Omar Bongo Square at clerks’ quarters, the civil engineering corps of the military has fenced a sizable portion of land on which to raise an ultra modern grand stand that would host the Head of state and his guests for the big event. Arab contractors have for their part set up their base opposite Bilingual grammar school Molyko. The company has been charged with the construction of the roads in the municipality among them the Afossi junction – Muea stretch, Malingo – Bulu blind centre and Bonduma – Afossi junction just to name these. Meanwhile the Belgian company rehabilitating the municipality’s potable water network is intensifying work. Pipes have already been laid from the catchment at Upper farms down to the city centre. Now they are moving through Long Street to Sasse College. From Buea, the ministers drove to Limbe from Sassenhorf through Bonadikombo with a stop at Wokoka junction where a low cost housing project has been earmarked on a 60 hectare piece of land. The 19 Km stretch from Buea to Bonadikombo is under construction though locals are complaining it is too narrow for two vehicles to bypass there-on. In Limbe, the ministers were guided to the various project sites. From Mbende junction – Garden junction road through the divisional tax center – special branch outlet road, Ngeme – Limbe multipurpose stadium road, 05 hectare low cost houses site at Bota to Down beach where the city council is seeking funds for what it termed the Limbe maritime area, the ministers did not skip any site. At the Japanese primary school at the entrance into Limbe where Mag enterprise is due to tar a 02 Km stretch into the quarter, work had not begun because another company that sought for the contact was claiming the contract award procedure was marred by irregularities. And the 01 Km stretch which Ets Bren was supposed to have begun building from Cde junction to Owe but for the lack of a service order, minister Mbwentcou ordered both companies to begin work immediately. For the latter he promised to issue them a provisionary service order pending the final one. He asked the contractors to forward copies of their contract documents to the Governor and the Sdo so that they too can ensure follow up. To this he added, “ you all have to finish your work latest March 31.We are the gendarmes now and mind you, we shall be here every month to evaluate the progress you have made.” Over in Kumba, FCFA 1.4 billion has been set aside for the tarring of the 3.5 km stretch between St John catholic mission and Kake II. Kumba I council mayor, Prince Ekale Mukete is lobbying for funds to construct a council chambers which will be named the reunification plaza. 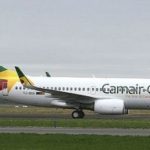