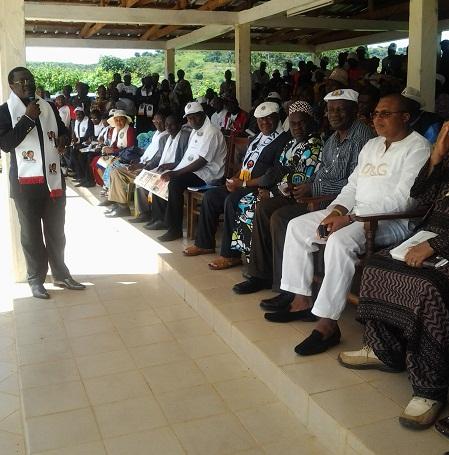 The launching of campaigns for the September 30 twin elections for the Menchum North constituency was an opportunity for the militants to reiterate their unalloyed support for the Cpdm and remain steadfast to the ideologies of the national president Paul Biya.

If the Cpdm has been recording good scores in the North West region, it is thanks to the usually good performance of the Menchum division, whose people have come to terms with the realities of the political chessboard and have chosen to take shelter in the Cpdm. Launching the campaigns Monday 16, 2013, the divisional campaign team headed by Hon. Nji Fidelis and accompanied by vice presidents Fon Aneng Francis and Ndzo Celestin were quite certain of the challenge of keeping the division’s cherished position. The team’s first stop was at the Zhoa grandstand, headquarters of Fungom division, where members of the campaign team were introduced and set to task.In Esu, the Palace hall could not contain the thousands of militants who had travelled from far and near to attend the rally. Militants came from Furu Awa and Fungom, localities which make up the Menchum North constituency. Hon. Nji Fidelis presented candidates of the party, while highlighting their resourcefulness and qualities as opposed to the un-profiled candidates of the opposition Sdf. According to him, if the Sdf had reasons to convince people to continue living in the dark, the Cpdm had even better arguments why the population had to remain steadfast to the party.  The past years have been years of bliss for Menchum North with numerous schools created, the construction of class rooms to house the growing schooling population as well as the digging of boreholes for pipe borne water, the construction of town halls and markets to name but these.Worthy of note is the fact that sons and daughters from the subdivision have been appointed to posts of responsibility in the government, not forgetting the only recently installed director of civic education and national integration at the ministry of Youth and Civic Education Ndzo Augustine, which was proof that President Paul Biya had the Menchum North constituency at heart. Projects like the Menchum damn and Kasina Ala in Furu Awa will see the recruitment of not less than 10.000 youths of the area. President Paul Biya’s promised ring road the militants were told would pass through Fungom division not forgetting that the road from Weh through Esu to Kasina Ala would be tarred.Having in mind all these goodies that the division as a whole would enjoy if it kept its word with the Cpdm, Fon Aneng Francis, Political bureau member, Fon Akao Fidelis, mayor of Furu Awa and Onko Moses all divisional vice presidents for the campaign, called on militants not to heed to false promises of the Sdf. They advised that campaigns be non violent and that privilege be given to door to door campaigns. Ndzo Celestin Ngongba, illustrious son of the area for his part noted that militants could only vote if they had their voter’s cards. That is why he insisted that militants who had not yet withdrawn their cards should do so in order to be ready for the September 30 rendez-vous. While highlighting the projects that would take the image of the division to another level, he recalled that “the Cpdm promises what it will do and does what it promises. Since taking over the Fungom council, some 64 classrooms have been constructed in schools in the area, 3 new markets in Weh and Bafmen, a modern council building worth 100 million as well as a magnificent grandstand are proof enough. The Menchum North constituency in particular and the division in general has a lot to be thankful for. This is yet another occasion for our militants to show their unflinching support to the party through which developmental projects will continue coming to the area. That is why we are intent on advising our militants to shun detractors who surge from every corner during times like these. The Sdf has for example developed a strategy of misinformation to create doubt in the minds of our militants. We have called on them to be more than ever vigilant and not fall in traps set by the opposition.” He nonetheless saluted the decamping of the Sdf divisional coordinator of Esu origin Kum Chrysantus during the rally, who had come along with some 300 militants from his party. 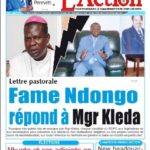