Over the years, political parties have lost their presence at the National Assembly while some have seen their numbers drop and others still have staged a comeback.

Cameroon’s current National Assembly, which opened with its statutory ordinary session yesterday October 29, after the September 30 twin elections, began in May 1973. The National Assembly is a house with a seductive past. It originally consisted of 120 members selected from the then provinces on a demographic basis. It meets in plenary and ordinary sessions of 30 days each and consists of various committees presided over by an internally elected President. Members of the Assembly can be called into an extraordinary session by the head of state or a two-thirds majority of parliamentarians.
They elect their own members of the National Assembly Bureau.Prior to the drawing up of a new constitution for Cameroon in 1996, the president (speaker) of the Assembly was the provisional successor to the head of state. Between 1973 and 1988 members to the National Assembly were preselected by the party and presented to the electorate for approval. Generally, the electorate unanimously approved the party’s single list. No member of parliament tabled a bill on the floor and the head of state exercised this prerogative almost single-handedly.In July 1983, a constitutional amendment increased the number of parliamentarians to 180.
After the November 1987 session, the Assembly was dissolved in favor of a new democratic option. For the first time, the party selected competitive lists of party members for various areas of the country in the parliamentary election of April 1988. Eighty-four percent of incumbents lost their seats. The speaker of the National Assembly for 15 years, Solomon Muna, resigned prior to the elections. He was replaced by another Anglophone, Lawrence Fonka Shang in June 1988.The advent of multiparty democracy in December 1990 brought further changes in the Assembly. For the first time since its creation, election to the Assembly was conducted on a multiparty basis.
The elections for the National Assembly of March 1992 were thus won by four parties: the Cameroon People’s Democratic Movement (CPDM) won 88 seats, the National Union for Democracy and Progress (NUDP) won 68 seats, the Union des Populations du Cameroon (UPC) won 18 seats, and the Movement pour la Défence de la République (MDR) won six seats. Despite this, the Assembly remained CPDM dominated. The MDR allied itself with the CPDM. Alongside this development was the change in the Assembly’s speaker. In the legislative last election, Cpdm went up to 148 seats, the social democratic front (SDF) won 18 seats, Undp got five seats, Udc won four seats, and after a long absence Upc is back with 3 seats. Mdr won one seat, a comeback and Mrc, a budding party got one seat.
The Mp of the “man in black,” Jean Jacques Ekindi left the house.For the first time since the formation of a unitary state, a francophone, Cavayé Yeguie Djibril became speaker in 1992. If voted this year, he will begin his 22nd year in power, uninterrupted.In April 2012, the 70 pioneer members of the Senate were elected, 30 were appointed by the President of the Republic.The Constitution of 1996 creates a two-chamber legislature with a Senate and the National Assembly. The speaker of the Senate or his vice speaker becomes the interim successor of the head of State should the President be incapacitated or die. 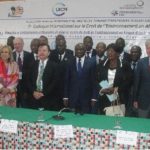