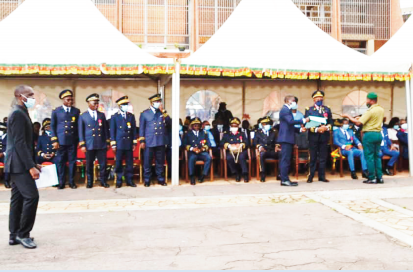 The 48th edition of the National day celebration postponed due to the outbreak of the coronavirus pandemic, has had a replay.

The ceremony took place on Friday October 16 at the esplanade of the Yaoundé City council. The governor of the Centre Region on the instructions of the Head of State Paul Biya Presided over the Medal award ceremony of some meritorious Cameroonians for their service to the Nation. The governor for the Centre region, Naseri Paul Bea in the presence of other political authorities such as the Yaoundé city Mayor Messi Atangana, the Minister of Defence, Joseph Betti Assomo, the Senior Divisional Officer for Mfoundi put smiles on the faces of the happy recipients. It was also an encouragement for them to do more, as such continue to be torchbearers of excellence for others to see and follow their good example. The highly colourful event also saw the decoration to different ranks of some six militants of the CPDM. Prof. Paul Celestin Ndembiyembe, Secretary for political training and perspectives for the CPDM Central Committee was decorated by the governor for the centre region as Officer of the Order of valour. Madame Enanga Kebbi Juliana, who doubles as Chargé des Missions in the CPDM and audio-visual editor in chief received from the hands of the governor, a Medal as Commander of National Order of Valour. The governor also decorated Madame Yayi Colette, secretary at the central committee of the CPDM. She received a medal as Commander of the Order of Valour. Like her colleague, Mme Manga Marie Hortense, Secretary of the deputy Secretary General of the Central Committee was decorated. Sanama Nkono Jean and Ngwanza Stephan both Chargé de Mission for the Centre and Littoral respectively were also decorated. It is worth noting that this event was supposed to take place on May 20, 2020, but was postponed because of the Covid-19 scare. 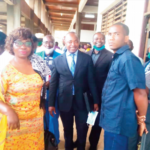 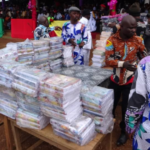