The ride for teams on the field has not been all jolly but despite hitches, the quest is to record good results before the April 13 deadline.

Echoes from the field indicate that militants have been fully involved in the exercise, which is in prelude to the renewal of CPDM’s basic organs. Despite the morose health context due to Covid-19, various committees in charge of the validation process have activated diverse schemes to get the work done before the end-whistle goes off. In strict respect of the SG’s circular, the head count that seeks to provide the Party’s hierarchy with a clearer picture of its militant base has been ongoing with the major hitch being the availability of membership cards on the field. According to the Party’s texts, one can lay claim to his belonging to the CPDM only if he is in possession of this document. The rarity of these cards are thus posing a major setback for teams who have to spend quality time waiting for these to be available.
This notwithstanding, members of committees in charge of the validation process have found ways to bypass this problem, registering militants as expected while waiting for cards to be dispatched. As much as some localities have been served with these identification documents, others are in the dilemma of sections that have to be split. There are laid down criteria for this to be done and the hope is for militants to consider the common goal of the party which is to facilitate access with the base and not personal interests. According to field reports, old and new militants are cuing up to have their cards because many have been supporting the party without being fully registered. This exercise is thus not only to set the records of militants straight but to recruit new ones, vibrant young men and women who have adhered to the ideologies of the CPDM.
At home like abroad, the Covid-19 situation is to blame for the difficulty to circulate and bring people together. As much is being done for the exercise to unfold in strict respect of barrier measures prescribed by government, the Party hierarchy is aware of its calendar and is using every strategy to get the work accomplished on time. 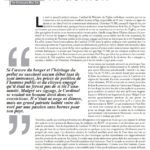