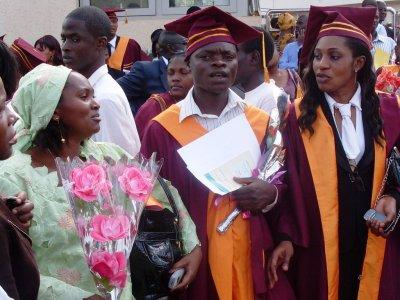 The graduates were handed their certificates at a ceremony organized at the Yaounde sports complex Tuesday December 6, in the presence of some government officials as well as friends and family. Looking enthusiastic and happy in their ox-blood and orange robes, the men and women assembled again after having defended their thesis to receive certificates attesting their two or three years of hard work and determination. New teachers in language, geography, history, mathematics, physics, computer science just to name these, all falling under the departments of Letters, Human sciences and Science have been sent forth to feel the vacuum existing in classrooms around the country.
Presenting the laureates of the 50th batch of the institution, the director of the school, Professor Nicolas Angiga saluted the bravery of the men and women in overcoming the hurdles up to this point, while encouraging them to brace themselves for unforeseen eventualities on the fields. Combining the first and second cycles that were graduating, 1895 internal candidates a well as 1771 external had successfully done their studies, recording a percentage of 93.56% and 93.45% respectively. He expressed his pride in being part of the graduation of the 50th batch of the institution since its creation in 1961 that has since then sent forth well trained teachers.Presiding at the graduation ceremony the minister of Higher Education Professor Jacques Fame Ndongo, outlined the importance the Head of State Paul Biya, attaches to education, which he said would contribute a great deal in the country’s emergence by 2035. While addressing the new teachers, the minister of Higher Education said being the 50th batch was quite symbolic, for it “signified an age of maturity an experience” and therefore called on them to shun absenteeism and laziness which could compromise the education of young Cameroonians – apparent future leaders. Referring to them as “gladiators of chalk and pen”, minister Fame Ndongo said no matter where the teachers were sent, be it in Wum, Meganga, Olamze or Bali Nyonga, they had to consider it as Cameroon and therefore strive in their own little way to make the nation a prosperous nation. A particularity of this year’s ceremony was the graduation of the first batch of teachers of national languages and cultures. The 37 men and women have not only received theoretical training but have beefed up their skills in practical work done in the 7 pilot language institutes opened in 7 regions in the country.
The department was created by the minister of Higher education, at the Advanced Teacher’s Training School (ENS) in 2008 after an expressed need by the minister of Secondary education, Louis Bapes Bapes for national languages and cultures to be taught in schools. In a dissertation, the head of the department, Prof. Zachée Denis Bitcha Koby outlined the importance of teaching national languages in schools as a means of passing on the cultures and values of a people. According to Professor, Fame Ndongo, “the teachers have become authentic Cameroonians” by mastering so many mother tongues. The teaching of languages like Fufuldé, Lamso, Bamiléké, Bulu, Limbum amongst other dialects he said though different in nature, would foster national unity and integrity. According to Nge Deris graduate of the department, “being the first batch of teachers in this field, we have an ardent challenge to tutor young Cameroonians national languages and culture so that these values don’t die with modernization. Our prayer is that the policy makers will not leave this wonderful initiative in drawers, but rather make it better known as is already the case with us”. Expressing their joy at what some termed a break through after three years of studies, the graduates said it was a tile to give back what they have been taught in order to prepare young Cameroonians for the future. Knowing that the taste of the pudding is in the eating, the teachers have vowed to proof their worth in the various classrooms where they will be sent.It was equally a time to recognize the work done by three of the school’s professors going on retirement. Surprising the intellectuals, Professor Fame Ndongo asked two of the three professors to be signed new contracts in order that they continue their work for as he put it, the likes of them were quite rare. 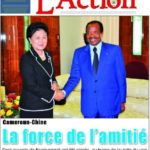 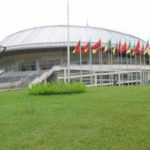