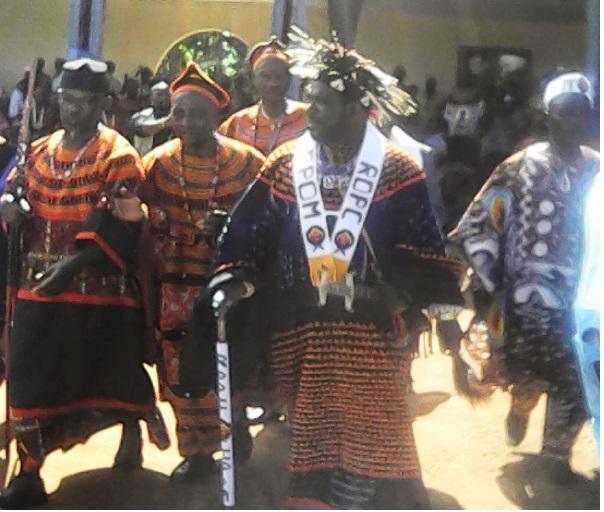 It was in the presence of CC delegates SG’s personal representative, Mezam I Section Executive, North West Fons Union’s executive, the region’s administration and the population of Nkwen.

Excitement gripped militants of the Cpdm in particular and the population of Nkwen in general last Friday September 19, 2014, when their new paramount ruler, King Azehfor III openly and publicly declared his total support and loyalty to the ruling Cameroon’s People Democratic Movement, the CPDM. Installed less than a year ago after his father passed on, Fon Azehfor III used the occasion of the joint Subsections in Nkwen’s visit to pay homage to him as their new leader to declare his support and membership into the CPDM fold. Being the very first time a Nkwen Fon has taken such a bold step in the politically challenging environment, the paramount ruler of Nkwen, one of the most populous villages in Mezam Division virtually set out to take CPDM to a different pedestal as his influence in the Fondom is unmatched.In declaring for the ruling Cpdm, His Majesty was by extension inviting all the sons and daughters of his fondom to rally behind him for the development of this Second Class Fondom that begs to be reclassified. “You must remember that the CPDM party is a party of development, a party of peace, a party of hope and the only party that will lead us through in the program of H.E Paul Biya “Cameroon Emergence by 2035”. I hope we shall all join the National Chairman on November 6th to celebrate this newfound commitment from the people of Nkwen,’ he advised his subjects.The droves of militants from across Mezam and the Nkwen population that turned out to witness the event were all joyous when the fon of the Nkwen people went ahead to apportion a piece of land for the construction of a party secretariat in Nkwen. In return he urged the powers that be to help him dissimilate the Cpdm doctrine by also appointing his sons and daughters into positions of responsibilities in Cameroon. To him, “Nkwen fondom has sons and daughters that can also be appointed D.Os, S.D.Os, Governors, Managers, Directors, Government Delegates and ministers”.  While maintaining that the time is now, he stressed that Nkwen sons and daughters are well educated. After the Fon’s declaration, Subsections executive in Nkwen joined Ngante Martin Ngoh, Nkwen elite and Council Commission Resource person for the Cpdm in Bamenda III to hand over party gadgets to the new militant. In response to the Fon, Mme Regina Mundi, Political bureau member and personal representative of the Secretary General of the Central Committee said the entire Cpdm family in the North West was happy to welcome the new fon of Nkwen into the Cpdm. She thanked all those who worked tirelessly for the success of the event and read out a message sent by Jean Nkwete, Central Committee Secretary General thanking the Fon of Nkwen for taking the wise decision and especially for offering land to the party for the construction of the secretariat. In the letter the Secretary General promised to work hand in glove with the paramount ruler of Nkwen to see to it that the party in Bamenda III grows from strength to strength. For his part, the Vice Section President of Mezam I, Matoya Anye Cletus, representing Paul Atanga Nji, Mezam I Section President declared how happy Mezam I was in welcoming the news of the conversion of the ruler of the Nkwen people into the Cpdm. He was convinced that with this move things would never be the same in Nkwen and urged the Fon to follow the footsteps of the Senator Teche Njei, Fon of Ngemwa.