The local economy has taken a serious hit resulting from restrictive measures put in place with the advent of Covid 19.With ongoing preparations to open boarders, hopes for recovery are rife.

Apopular joke on social media these past weeks holds that if your relationship is valued at the price of fresh tomatoes in markets, then you are in troubled waters. A joke per se, but the situation is no laughing matter, it is in fact dire. Currently, a basket of tomatoes sells at CFA 2000frs. An improvement from two weeks back when the same baskets ranged from CFA 1000 to 1500frs. Stories have been told of farmers of this vegetable almost losing their minds due to huge losses incurred in the production chain. From loans contracted in various financial houses to human labour hired to work in the farms, the expenses are enormous. The abundance of this fruit on the market has been blamed on boarders that have remained close since March 17 2020 as part of restrictive measures to stall the spread of the deadly coronavirus. Cameroon, considered a breadbasket in the sub-region exports such commodities as tomatoes to neighbouring countries like Gabon, Equatorial Guinea and Nigeria. Because the once vibrant Abang Minko boarder market in the South region, Ekok in the South West where farmers of such produce made money have been shut down, producers have had no choice but to flood local markets with their commodities and in line with the law of economy, with abundance there is a drop in prices. Thus following presentations made by various ministers on measures put in place ahead of reopening boarders, expectations are high as to the economy making a U-turn. According Gabriel Mbairobe, Minister of Agriculture and Rural Development, as part of recovery measures support will be given to identified production cooperatives that have received a blow this period. This he stressed will enable them stabilise production. Prime Minister Dion Ngute on Tuesday July 28 met with Celestine Tawamba, president of Gicam to discuss ways to relaunch the economy, presently under the weather due to the adverse effects of covid19. Experts say innovative pathways need to be sought while encouraging a ,change in paradigms. 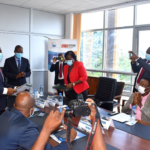